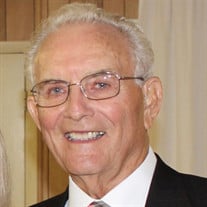 Willie Jehu Tyson, 84, surrounded by family, peacefully left this world to enter his heavenly home on March 17, 2020. He was a resident of Perry, Georgia, since 1957. Due to issues associated with the current state of emergency, the family has chosen to conduct a small family funeral with only members of the immediate family in attendance. At a date to be announced later, there will be a memorial service where all friends and family will be invited to attend and honor the life well-lived of Willie Jehu Tyson. In lieu of flowers, the family respectfully requests contributions to Fellowship Primitive Baptist Church, c/o Brett Hardy, 302 Old Windmill Rd., Perry, GA 31069 or UGA CAES Eterna Fund at https://t.uga.edu/5Lp. Willie was born of humble beginnings in a log house on an 80-acre farm in Tifton, Georgia, in 1935, in the middle of the Great Depression. He graduated from Tift County High School, attended Abraham Baldwin Agricultural College, and in 1957, graduated from the University of Georgia with a degree in Agricultural Engineering. Despite the difficult times of his early years, he was the first of his extended family to attend college. Following his lead, all three of his children and 8 of his grandchildren attended the University of Georgia. After graduating from the University of Georgia, he moved to Perry, Georgia, and began working at Robins Air Force Base where he worked his entire career. He retired in 1992 as Director of Civilian Personnel Management. Even though his career took him away from his agricultural roots, he always maintained that connection as a part-time farmer raising beef cattle, hay, soybeans, and wheat on his farm in Houston County. He was a founding member and president of the Perry Saddle Club in the 1970’s. He also maintained his connection to the University of Georgia College of Agricultural and Environmental Sciences serving as a tireless volunteer for the Alumni Association, and as president of the Association in 1991-92. He was inducted as an honorary member of AGHON, an Agricultural Honorary Society in 2017. He was also a long-time member of the Houston County Farm Bureau and the Perry Kiwanis Club and was serving on the board of directors of both at the time of his death. Mr. Tyson was a member of the Primitive Baptist faith and was a long-time member and deacon at Fellowship Primitive Baptist Church in Fort Valley. Mr. Tyson was preceded in death by his parents, Jehu Tyson and Nora Mason Tyson, of Tifton; his daughter-in-law, Mona Behrends Tyson; and two brothers, Carlton James Tyson and Floyd Hugh Tyson. Mr. Tyson is survived by the love of his life, his wife of 64 years, Barbara Pitzer Tyson of Perry; a son and daughter-in-law, Anthony W. and Greta Tyson of Colbert, Georgia; his daughters and sons-in-law, Betsy and Reuben Flanders of Waycross, and Jody and Edmond Strickland of Perry; and one sister, Irene Tyson Self of Haynesville. At the time of his death, he had 9 grandchildren; 18 great-grandchildren, expecting two more; and numerous nieces and nephews. He was a family man who was immensely proud of all his children and grandchildren. All who knew and loved Willie Tyson would agree with the words of our Lord from Matthew 25:21, “Well done, good and faithful servant.” Condolences for the family may be left in the online guestbook at www.watsonhunt.com. Watson-Hunt Funeral Home has been entrusted with the arrangements.

Willie Jehu Tyson, 84, surrounded by family, peacefully left this world to enter his heavenly home on March 17, 2020. He was a resident of Perry, Georgia, since 1957. Due to issues associated with the current state of emergency, the family has... View Obituary & Service Information