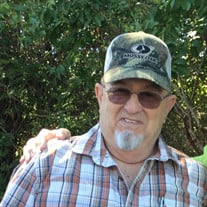 MILLEDGEVILLE, GA – William “Earl” St. John, 80, passed away peacefully on Saturday, April 11, 2020, after an extended illness. There will be a private Graveside Service for the family on Thursday, April 16, 2020, at 2:00 p.m. CST in Herndon Cemetery in Clarksville, Florida, where he will be laid to rest beside his beloved wife of 40 years, Charlotte Kay Smith St. John. In lieu of flowers, the family respectfully requests memorial contributions to The Fisher Center for Alzheimer’s Research Foundation, FDR Station, PO Box 220 New York, NY 10150. Donation Information is available online. Earl was born in Hawley, TX, to the late James Wesley and Newell Davis St. John. He joined the U.S. Air Force at age of 17 and enjoyed tours in Japan, Vietnam, Georgia, Germany, Greece, Italy, and eventually settled in Warner Robins, GA, at Robins Air Force Base (RAFB) where he retired from enlisted status after 20 years of service as a Technical Sergeant. Earl then worked Civil Service at RAFB in the Quality Assurance Department for an additional 20 years, then permanently retired. After the loss of his wife in 2003, he moved to Panama City, FL, several towns in Colorado, and Milledgeville, GA, sharing time living with his family members in each location. Earl was preceded in death by his parents; his loving wife of over 40 years, Charlotte Kay Smith St. John; his brother, Jack St. John; and his sister, Myrtle McElroy. Left to cherish the memories they made with Earl are his children, Callen St. John (Angela) of Denver, CO, Renee Jordan (Richard) and Rev. James St. John (Marjorie), both of Milledgeville, GA; 19 grandchildren; 5 great-grandchildren; his sister, Martha Gadsbury of Texas; and several nieces and nephews. Condolences for the family may be left in the online guestbook at www.watsonhunt.com. Watson-Hunt Funeral Home in Perry, GA, has been entrusted with the arrangements.

The family of William EARL St. John created this Life Tributes page to make it easy to share your memories.