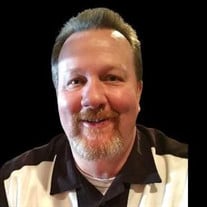 PERRY – William Rene’ “Bill” Knight passed away peacefully on Sunday, April 24, 2022. He was 59. Funeral Services will be held in Perry on Thursday, April 28, 2022, at First Baptist Church of Perry with the Visitation beginning at 1:00 p.m. and the Funeral beginning at 2:00 p.m. Graveside Services will be held in Savannah on Friday, April 29, 2022, at 11:00 a.m. in Forest Lawn Memory Gardens. A brief Visitation will begin at 10:30 a.m. before the graveside service. Flowers will be gratefully accepted or memorial contributions may be made to First Baptist Church of Perry, House of God Building Fund, 1105 Main Street, Perry, GA 31069. Bill was born in Savannah to the late William Elmer Knight and the late Odette Jermaine Briche Knight. He grew up in Thunderbolt, Georgia, where he graduated from Sol C. Johnson High School in 1980. He went on to receive a diploma from Savannah Technical School in Machine Tools, and married the love of his life, Lorraine McEwen. He proudly served our country in the U.S. Air National Guard for twenty years. Bill also proudly worked for twenty years as a Civil Servant at the 165th Airlift Wing in Savannah and at Robins Air Force Base in Warner Robins. Bill had been an active member at First Baptist Church of Richmond Hill before moving with his family to Middle Georgia where he continued to profess his faith as an active member of First Baptist Church of Perry. He was a member of Turner Sunday School Class and a former member of the Sanctuary Choir. Bill had a great sense of humor and was a great storyteller, and could often be found surrounded by friends and family listening for the punch line. He enjoyed cooking, particularly grilling, and spent time watching demonstration videos on YouTube then trying recipes, serving family and friends. He dearly loved his family and provided a wonderful example for his children and grandchildren of a true Southern Gentleman, providing for his family and leading them through life with his Christian faith. Bill was preceded in death by his parents. Left to cherish the memories they made with Bill are his loving and devoted wife of thirty-nine years, Lorraine Knight of Perry; his children, Tiffany Knight and Daniel Knight, both of Perry; his grandchildren, Cadence “Doodle” McCrary and Ben “Buddy” McCrary; several nieces, nephews, cousins, and extended family members; and his faithful, four-legged friends, Sammy and Simon. Condolences for the family may be left in the online guestbook at www.watsonhunt.com. Watson-Hunt Funeral Home has been entrusted with the arrangements.

The family of WILLIAM RENE' "BILL" KNIGHT created this Life Tributes page to make it easy to share your memories.

Send flowers to the KNIGHT family.