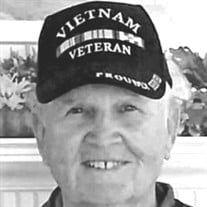 TOM MOODY PERRY – William Thomas “Tom” Moody, 82, passed away peacefully on Wednesday, March 30, 2022, after an extended illness. Graveside Services will be held on Saturday, April 2, 2022, at 1:00 p.m. in Perry Memorial Gardens. In lieu of flowers, the family respectfully requests memorial contributions to Kindred Hospice, 105 Jim Mason Court, #100, Warner Robins, GA 31088. Tom was born in Alexander City, Alabama, and graduated from Deshler High School in Tuscumbia in 1957. Upon graduation, he followed in his father’s footsteps and joined the U. S. Air Force. Tom was proud to serve his country, earned the rank of Senior Master Sargent, and retired after twenty-six years of service. While stationed at Robins Air Force Base, as a young enlisted airman, he met and married the love of his life, Jerry Lasseter, from Perry. The family moved around the country, eventually retiring in Ft. Walton Beach FL. Tom proudly served in the Vietnam conflict, Germany, Philippines, and Taiwan. After his retirement from the USAF, he worked at Rocky Bayou Golf Course in Niceville, Florida, for two years. In 1985, Tom took a job with Civil Service at Hurlburt Field Air Force Base in Mary Esther, Florida, where he worked in Records Management for fifteen years until retirement. In 2007 he and Jerry moved to her hometown of Perry, Georgia, to live near family. Jerry’s dad, Aldene, introduced Tom to golf. Tom developed a love for the game and became an avid golfer, accomplishing three holes in one over the years. Tom was a member of First Baptist Church of Perry. Every day in the early quiet morning hours, Tom spent time with our Lord through devotions and prayer. Tom was preceded in death by his parents, Orville and Erma Norris Moody; a brother, Ed Moody; a sister, Margaret Rodgers; and his beloved wife of fifty-nine years, Jerry Dean Lasseter Moody. Left to cherish the memories they made with Tom are his sons, Tommy Moody (Leesa) of Tifton, GA, and Mark Moody of Perry; his grandchildren, Logan Moody, Erin Trexler (Luke), Nikki Salinas, and Makenzie Moody; his great-grandchildren, Jackson Dean Trexler, Chantelle Salinas, and Justin Salinas; his brothers, Jim Moody (Nancy) and Bob Moody; his sister-in-law, Katie Moody; his brother-in-law, Alvie Rodgers; his late wife’s siblings, Al Lasseter (Andrea), Leah Lasseter Lockerman, and Candi Lasseter James (Mark), all of Perry; and several nieces and nephews. Our heartfelt thanks go to Kindred Hospice and Tom’s caregivers Shirley Thomas, Viola Freeman and Sarah Jackson. Condolences for the family may be left in the online guestbook at www.watsonhunt.com. Watson-Hunt Funeral Home has been entrusted with the arrangements.

The family of WILLIAM THOMAS MOODY created this Life Tributes page to make it easy to share your memories.

Send flowers to the MOODY family.