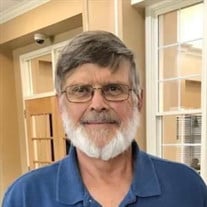 PERRY - William “Allen” Brown, age 68, of Perry, Georgia passed away on Tuesday, October 5, 2021, at the home of Bobby and Glenda McLeod surrounded by his loving family. Services will be held on Thursday, October 7, 2021, at Watson-Hunt Funeral Home with the Visitation starting at 1:00 p.m. and the Memorial Service beginning at 2:00 p.m. In lieu of flowers, the family respectfully requests memorial contributions to the Georgia Transplant Foundation, 2201 Macy Drive, Roswell, Georgia 30076. Allen was born July 16, 1953, in Eastman, Georgia, to Jordan Brown, Jr. and the late Frances Brown Lamberth. He was a graduate of Perry High School and spent the majority of his life in Perry. Most of his free time was spent tinkering, fishing, shooting guns, and camping. Allen was always ready to help those around him. Retiring after 36 years at Weyerhaeuser, he looked forward to spending time with his family, especially his grandchildren. Allen was preceded in death by his parents and wife of 25 years, Denise Pitzer Brown. Allen is survived by two children, his daughter, Heather Tollett and husband Michael of Quitman, Arkansas and son Chris Brown and wife Crystal of Perry, Georgia. He is also survived by two grandchildren, Taylor Tollett and Sawyer Brown, and one great-grandchild, Rhett Tollett. Allen also leaves behind two loving sisters who hold a special place in their hearts for their brother: Glenda McLeod and husband Bobby of Milledgeville, Georgia and Sandra Bauldree and husband Larry of Perry, Georgia along with several nieces and nephews. Condolences for the family may be left in the online guestbook at www.watsonhunt.com. Watson-Hunt Funeral has been entrusted with the arrangements.

The family of WILLIAM ALLEN BROWN created this Life Tributes page to make it easy to share your memories.

Send flowers to the BROWN family.