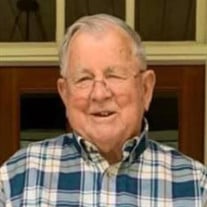 PERRY – William Earl Brett, 77, passed away unexpectedly after a sudden illness. Everyone is invited to participate in a safe-distance visitation by remaining in the comfort of your vehicle as you drive through the circle driveway at Watson-Hunt Funeral Home to show love and support for the family on Monday, April 20, 2020, from 11:00 a.m. until 12:30 p.m. A private Graveside Service will be held for the family at Sisters Baptist Church Cemetery in Sandersville. In lieu of flowers, the family respectfully requests memorial contributions to Heart of Georgia Hospice honoring their service to Peggy and the Brett family. Their address is 103 Westridge Drive, Warner Robins, GA 31088. Earl was born in Sandersville to the late Clay and Dot Chapman Brett. Raised on the family farm, Earl grew up working hard from dawn to dusk and learned the responsibilities of being a husband, brother, and father from an early age. In high school, Earl enjoyed playing baseball, but eventually gave it up as his farm chores took more of his time. After graduation from Washington County High School, he moved to Athens and earned a Bachelor’s Degree in Animal Science from the University of Georgia. As he entered the world of adulthood, he married the love of his live, Peggy Ison, and took his first “real” job with Civil Service in Soil Conservation with the Department of Agriculture in Dooly County, and the couple moved to Vienna. He was transferred to various locations, moved back to Sandersville for a few years, then eventually settled in Perry to take a position with Civil Service as a Program Manager at Robins Air Force Base. Earl and Peggy knew Perry would be the perfect place to raise their three sons. Earl was always very involved in the lives of his children and grandchildren and very supportive of the sports in which they chose to participate. From volunteering at their schools to coaching little league when needed, he spent most of his free time with his family, cheering for their baseball, football, basketball, or soccer players. Whatever “season” it was, Earl was always excited to see the new teams assembled, their progress in battling other teams, their success, and hopes for a championship trophy in the end. Earl was a long-time member of First Baptist Church of Perry and the Avon Buice Sunday School Class. Often, he could be found serving others in his church and those in need. He sacrificed a great deal to be the best husband, father, and grandfather that he could be. Earl loved his family, but dearly missed his sweet wife since her passing in 2017. He will be sincerely missed by all those whose lives he touched, but we rejoice in knowing that he is with his Lord and savior and reunited with his beloved Peggy. Left to cherish the memories they made with Earl are his loving and devoted sons and their wives, Jeff and Martha Brett, Joey and Robbi Brett, and Jason and Amy Brett, all of Perry; his grandchildren, Lauren B. Kinder (Keegan), Will Brett, Sunni Brett, Mary Kate Brett, Caden Brett, Reese Brett, Connor Brett, and Reid Brett; his brothers and sisters-in-law, Donald and Mylene Brett of Chattahoochee Hills, and Ronald and Cecelia Brett and Mike and Dena Brett, all of Sandersville; and many nieces and nephews. Condolences for the family may be left in the online guestbook at www.watsonhunt.com. Watson-Hunt Funeral Home has been entrusted with the arrangements.

PERRY &#8211; William Earl Brett, 77, passed away unexpectedly after a sudden illness. Everyone is invited to participate in a safe-distance visitation by remaining in the comfort of your vehicle as you drive through the circle driveway at Watson-Hunt... View Obituary & Service Information

The family of William EARL Brett created this Life Tributes page to make it easy to share your memories.

Customized sympathy cards. Mailed for you.