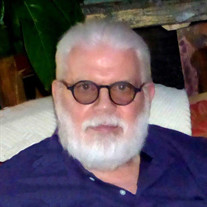 SNELLVILLE, GA – William Enoch “Bill” Edwards, Jr., 68, passed away on Monday, August 9, 2021, after an extended illness. At his request, there will be no services. His remains will be buried in Perry Memorial Gardens where he will be laid to rest beside his parents. In lieu of flowers, the family respectfully requests memorial contributions to Perry High School Band, 1307 North Avenue, Perry, GA 31069. Bill was born in Selma, Alabama, to the late William Enoch Edwards and the late Bessie Basford Edwards. He grew up going to First Baptist Church of Perry and playing in the Perry High School band. He was a 1970 graduate of Perry High School, and attended the University of Georgia. After college, Bill returned to Perry for a few years. During that time, he worked for the Green family at New Perry Hotel, and thus began his love for the hospitality industry. He moved to San Francisco, California, in 1981, and excitedly accepted a position at The Hotel Californian where he encountered a plethora of worldly and very interesting people and made many good friends. After just a few years, he discovered that he was more suited for life in Georgia. In the mid-1980’s, Bill moved to his beloved home in Atlanta where he lived for over thirty years. He was a long-time Desk Clerk and Night Auditor at The Wellsley Hotel in Atlanta. He loved his job and delighted in serving and talking with visitors from all over the world. He retired in 2017, thankful for a career that made him happy for many years. Bill treasured friendships with many of his classmates and friends from Perry, as well as others with whom he had crossed paths through the years. Left to cherish the memories they made with Bill are his sister and brother-in-law, Marcia and Henry Cotten of Dunwoody, GA; his nephew, Pritchett Cotten (Lizette); his niece, Lydia McNulty (Chris); and his special friend and confidante of over fifty years, Miriam Hancock Zimmermann (Anton) of Knoxville, TN. Since there will be no public opportunity to visit with the family, please leave condolence messages in the online guestbook at www.watsonhunt.com. Watson-Hunt Funeral Home has been entrusted with the arrangements.

The family of WILLIAM "BILL" ENOCH EDWARDS JR. created this Life Tributes page to make it easy to share your memories.

Send flowers to the EDWARDS family.