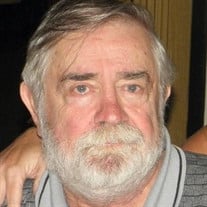 HAWKINSVILLE- William Haines Bedingfield, 76, passed away on Thursday, April 25, 2019. Visitation will be Sunday, April 28, 2019, at Watson-Hunt Funeral Home at 2:00 p.m., with the Funeral Service to follow at 3:00 p.m. Interment will be in Woodlawn Cemetery in Perry immediately following the service. In lieu of flowers, the family respectfully requests memorial contributions be made to the charity of the donor’s choice. Haines was born in Fitzgerald to the late Bill and Thelma Prescott Bedingfield on June 19, 1942. He grew up in Fitzgerald and was the somewhat “famous” soda jerk who had memorized the menu at The Spotted Pig where he worked when he was a teenager. He graduated from Fitzgerald High School in 1960 and proudly served our country in the U.S. Army. He went on to receive an Associate’s Degree and a Bachelor’s Degree in Business Administration. Having worked in the telecommunications business his entire over 30-year career, Haines worked for General Telephone Company as a Mechanical Engineer which eventually became Sprint. He and his family moved around the southeast with Sprint until his retirement, at which time he began doing contract work for several companies including United Technologies and 360 Communications. Through the years, Haines loved racing his #17 stock-car on weekends and fishing whenever he could. With a natural love for science, he took great pride in “helping” his daughters with their science projects while in school. He was very smart and witty and loved his family, especially his grandchildren. He was preceded in death by his brother, Ed Bedingfield; and his first wife, Charlotte Bedingfield. Left to cherish the memories of Haines are his wife of 14 years, Mary Bedingfield; his daughters and sons-in-law, Janie and Jim Mitchell and Jennifer and Chris Thomas, all of Lilburn; his grandchildren, Will Grinstead, Charlotte Grinstead, Kaelin Thomas, and Kendall Thomas; his brothers, Perry Bedingfield and Rev. Jim Bedingfield; his bonus sons, Robert Jordan II (Jacqueline) and Paul Jordan; his bonus grandchildren, Robee Jordan, Chloe Jordan Hren (Taylor), and Chris Jordan; and several nieces and nephews; and his faithful, four-legged companion, Sweet Pea, his dog. Condolences for the family may be left in the online guestbook at www.watsonhunt.com. Watson-Hunt Funeral Home has been entrusted with the arrangements.

The family of William Haines Bedingfield created this Life Tributes page to make it easy to share your memories.

Send flowers to the Bedingfield family.