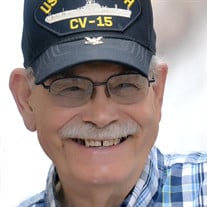 PERRY – Wilburn Wayne Hinson passed away peacefully on Sunday, March 29, 2020, just four days after his 80th birthday. A private burial service for the family will be held in Westview Cemetery in Nashville, GA, on Wednesday April 1, 2020, which will be available via live-stream. A “Celebration of Life” Service will be planned to honor Wayne, the life he lived, and the relationships he built once the restrictions on public gatherings are lifted. A timely announcement detailing the arrangements will be provided. Wayne was born in Nashville, GA, on March 25, 1940. He graduated from Berrien County High School in 1958 and immediately joined the U.S. Navy. He married the love of his life, his pen pal, Jo Hinson, in June 1960 and received an honorable discharge from the military in June 1964. He had a long and successful career in sales and earned a degree in Business Management. After leaving the public sector, he owned and operated his own business until his retirement. Having always had a love for motorcycles and developing a deep passion for winning souls to Jesus Christ, he along with his “bride,” Jo, joined Christian Motorcyclists Association. He served for several years in many different capacities, ultimately accepting a position as the organization’s Lay Evangelist, fulfilling his desire to win souls to Christ. Wayne also loved leather-working and woodworking but will always be remembered best for his pleasant smile and his gentle question, “Do you know Him?” He was preceded in death by his parents, Horace Wilburn Hinson and Dorothy Paul Hinson. Left to cherish the memories they made with Wayne are his loving and devoted wife of nearly 60 years, Jo Browning Hinson of Perry; his daughters, Dianna Hinson Hall of Tifton, and Donna Hinson Bostick of Kathleen; his grandchildren, Reed Hall (Kristen) of Tifton, and Krista Smith, affectionately called “his princess” (Josh) of Milledgeville; his great-grandchildren, Hayes, Branynn, and Banks; his brother, Ernest Hinson (Donna) of Jonesboro; his sister, Elaine Shiver of Nashville, GA. Many brothers and sisters of the Browning family who considered him one of their own after his marriage to Jo, as well as many nieces and nephews, also survive. Condolences for the family may be left in the online guestbook at www.watsonhunt.com, and the family welcomes visitors at their residence. Watson-Hunt Funeral Home has been entrusted with the arrangements.

PERRY &#8211; Wilburn Wayne Hinson passed away peacefully on Sunday, March 29, 2020, just four days after his 80th birthday. A private burial service for the family will be held in Westview Cemetery in Nashville, GA, on Wednesday April 1, 2020,... View Obituary & Service Information

The family of Wilburn Wayne Hinson created this Life Tributes page to make it easy to share your memories.

Send flowers to the Hinson family.