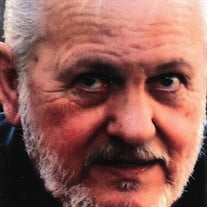 Wendell D. Ratterree, 81, passed away on Wednesday, August 25, 2021. Funeral Services will be held on Saturday, August 28, 2021, at 11:00 a.m. at First Baptist Church of Haynesville with Reverend David Fisher officiating. The family will receive friends beginning at 10:00 a.m., one hour prior to the service. In lieu of flowers, the family respectfully requests memorial contributions to Wounded Warrior Project, P.O. Box 758516, Topeka, Kansas 66675-8516. Wendell was born in Cordele, Georgia, to the late Harlan Ratterree and the late Frances Cason Ratterree. He was a graduate of Perry High School, where he met the love of his life, Emily Cook. The couple married, and Wendell worked at Medusa Cement and then went on to work in Law Enforcement with local agencies. He was a Deputy for the Houston County Sherriff’s Department and a Sergeant with Perry Police Department, during which time he started the Neighborhood Watch organization in Perry. Wendell later accepted a position in Civil Service at Robins Air Force Base, was eventually promoted to Supervisor of the Steam Plant, and retired after nearly thirty years of service. He always enjoyed meeting with his classmates at the Breakfast Club of PHS, and was a Presbyterian. Wendell was always considered the “family photographer,” and enjoyed creating videos for family and friends. He loved his country and was a true Patriot. Most of all, he enjoyed being with his family, especially keeping his grandchildren and great-grandchildren. He was affectionately known by his grandchildren as “Pa” Wendell was preceded in death by his parents and a daughter, Kelly Ratterree. Left to cherish the memories they made with Wendell are his loving and devoted wife of sixty years, Emily Cook Ratterree; his daughters, Wendy R. Pitzer and Stacy Young (Richard Black); his grandchildren, Jason M. Pitzer, Daniel C. Pitzer (Brooke Young), and Leslee H. Dean (Tommy); and his great-grandchildren, Tee Dean, Ryder Dean, Lana Pitzer and Deacon Pitzer. Condolences for the family may be left in the online guestbook at www.watsonhunt.com. Watson-Hunt Funeral Home has been entrusted with the arrangements.

The family of WENDELL DWAIN RATTERREE created this Life Tributes page to make it easy to share your memories.

Send flowers to the RATTERREE family.