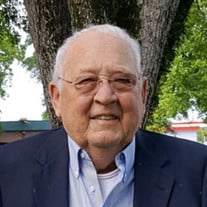 FORT VALLEY, GEORGIA – On August 8, 1942, Wayne E. Stoffell was born on his family’s farm in Knoxville, Tennessee, and on March 8, 2020, he rode off of his own family’s farm in Fort Valley, Georgia, for the last time, only to be walking through the fields of Heaven, once again at his father’s side. Funeral Services for Mr. Stoffell will be held on Wednesday, March 11, 2020, at Perry Presbyterian Church. The visitation will begin at 10:30 a.m., and the funeral service will begin at 12 Noon. Interment will be in Perry Memorial Gardens immediately following the service. Mr. Wayne had always enjoyed bright flowers, which will gratefully be accepted, and memorial contributions may be made to Perry Presbyterian Church’s Building Fund, 1111 S Second Street, Perry, GA 31069. In keeping with his love of bright colors, Wayne wanted everyone who attends his services to dress in bright colors. (Some may even choose to wear orange, the favored color of his beloved University of Tennessee!) While Wayne was born on the family farm in Tennessee, he began helping his father of the family’s dairy farm at a very early age. Once he graduated from high school, he continued working for his father, helping him make their own milk, ice cream, and other dairy products. Soon, he met and married the love of his life, Cathy Housley, and the couple soon had two beautiful little girls. With their children in tow, Wayne and Cathy moved to Peach County, Georgia, where they purchased the land and began their own dairy farm in 1970. Secondary to his cows were the thousands of pecan trees that he nurtured and harvested each year. Through the many years of developing various methods of milking and growing his herd to capacity, Wayne was awarded numerous trophies and recognition for his work in the dairy cattle industry. By the time he retired in 2011, Stoffell Dairy Farm was one of the largest in the Southern United States, milking 1000 cows daily. Wayne Stoffell was a well-known farmer in the business, but he was most proud of the values and morals he had instilled in his family by exhibiting his personal relationship with God, with his wife, and with his family. He truly was a husband, father, and grandfather who protected, cared for, and provided for his family. His beloved UT Volunteers were not far behind his family in the realm of importance. He had always been a fan and enjoyed all of the times he was able to take his family to the games through the years. Wayne was preceded in death by his parents, John and Evalyn Stoffell; his sister, Mary Stoffell Purnell; and a granddaughter, Amber Sanders Smith. Left to cherish the memories they made with Wayne are his loving and devoted wife of 53 years, Cathy Stoffell; his daughters and sons-in-law, Robin and Bill O’Neal of Perry and Holly and Danny Sanders of Peach County; his son by choice, Aaron Lopez; his grandchildren who lovingly referred to him as Papaw, Lexi O’Neal Reilly (Art), Wayne O’Neal, Caroline O’Neal, Grace Peavy, Griffin Peavy, Holly Sanders, and Dani Sanders Hudson (Taylor); his sister, Margaret Smith (Don), his brother, John Stoffell (Sandra), and numerous nieces and nephews. Condolences for the family may be left in the online guestbook at www.watsonhunt.com. Watson-Hunt Funeral Home in Perry, GA, has been entrusted with the arrangements.

The family of Wayne Edward Stoffell created this Life Tributes page to make it easy to share your memories.

Send flowers to the Stoffell family.