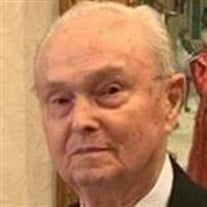 CHESAPEAKE, VA - Thomas Mustin, age 87, passed away on Wednesday, May 15, 2019, at Sentara Leigh Hospital in Norfolk, VA, surrounded by his loving family. He was born on February 28, 1932, in Montgomery, AL, to the late John and Ruth Mustin. He began his career as a plasterer in 1948 and ultimately became a building contractor within the surrounding Tidewater area. He graduated from Norview High School in 1949 and remained associated locally with his surviving classmates until his passing. On July 3, 1962, Thomas was driving at the intersection of Chesapeake Blvd. and East Little Creek Road when an angel from heaven appeared in his car. Thomas knew this was his last chance to give his life to Christ. He immediately emptied his car, drove to Christ’s Sanctified Holy Church on Sewell’s Point Road, Norfolk, VA, and gave his life to Christ. He became an ordained minister for Christ, and was the co-leader of Christ’s Sanctified Holy Church, Chesapeake, VA. He is survived by his wife of 53 years, Martha Woods Mustin; his two children, Gene Mustin (Cindy) and Grace Temple (Tim); five grandchildren, Olivia Clelland (Parker), Emma Mustin, Gray Mustin, Abigail Temple, and Rebekah Temple; two sisters, Margaret Collier and Johnnie Woods (Billy); one sister-in-law, Loretta Mustin; and a host of other close family/church members to which he will forever be known as “Pepaw” or “Uncle Tommy”. He was preceded in death by his brother, Kendrick Mustin; and his brother-in-law, Robert Collier, Sr. In lieu of flowers, the family requests memorial contributions be directed to Christ’s Sanctified Holy Church, c/o Gale Murphy, 4609 Chippendale Ct., Virginia Beach, VA, 23455. The family will visit with friends and family on Saturday, May 18, 2019, from 6:00 until 8:00 p.m. at Christ’s Sanctified Holy Church in Perry. Funeral Services will be held on Sunday, May 19, 2019, at 2:00 p.m. at Christ’s Sanctified Holy Church with the Interment in the Campground Cemetery immediately following the service.

CHESAPEAKE, VA - Thomas Mustin, age 87, passed away on Wednesday, May 15, 2019, at Sentara Leigh Hospital in Norfolk, VA, surrounded by his loving family. He was born on February 28, 1932, in Montgomery, AL, to the late John and Ruth Mustin.... View Obituary & Service Information

The family of Thomas Mustin created this Life Tributes page to make it easy to share your memories.

Send flowers to the Mustin family.