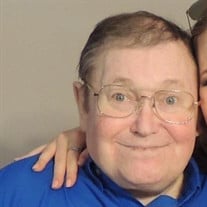 VALDOSTA – Thomas Edmund Britt, Sr., 73, entered into eternal rest on Thursday, February 20, 2020, at Heart of Georgia Hospice’s Hazel Colson Hospice House in Perry after an extended illness. A Memorial Service to celebrate the life of Mr. Britt will be held at a later date. In lieu of flowers, the family respectfully requests memorial contributions to Heart of Georgia Hospice, 1120 Morningside Drive, Perry, GA 31069. Mr. Britt was born in Flushings, New York, on October 4, 1946, to the late Edmund and Beatrice Bankert Britt and was raised in West Palm Beach, Florida. At the age of 17, Tom had a strong desire to serve our country in the U. S. Air Force and proudly joined. He met and married the love of his life, Jeanne Barnette in 1964, moved to various locations in the continental United States, and had two children. After enjoying a successful 27-year career, he retired as a Senior Master Sergeant in 1991. Tom and his wife made Valdosta their home for over 40 years. Through the years, he came to love flying more and more and never lost the thrill that came from being above the clouds. Tom’s passion in life, though, was his family, for which his love was never-ending. A beloved husband, father, brother, grandfather, great-grandfather, uncle, and friend to many, Tom never met a stranger. To know him was to love him, and he will be dearly missed by those who knew and loved him. He was preceded in death by his parents. Left to cherish the memories they made with Tom are his loving and devoted wife of 55 years, Jeanne Barnette Britt of Valdosta; his children, Thomas Britt, Jr. (Trina) of Jasper, GA, and Trina Lavender-Lain (Chip) of Perry, GA; his godmother, Viola Bankert; his grandchildren, Reece (Brittany), Cole (Harley), Kelley, Katie, Scottlyn, Shalyn, and Drew (Devin); his great-grandchildren, Warren, Virginia, and Judd; his siblings, Didi Lowe (Butch), Steven Britt (Sandy), Gene Britt, Bruce Britt (Kathy), and Vera Britt; his cousins, Phillip (Katrina) and John; his in-laws, Marion (Kenny), Tommy (Rachel), Richard (Selena), Debbie (Wayne), Buddy (Carolyn), Pearl (Carlie); his nieces and nephews, Ken, Jeff, Scoot, Gina, Paul, Caroline, Wayne Jr., Anna, Crystal, Stevie, Keith, Nancy, Travis, Allie, Drew, Beau, and Brittany. Tom will also be forever remembered by other extended family members and friends. Condolences for the family may be left in the online guestbook at www.watsonhunt.com. Watson-Hunt Funeral Home has been entrusted with the arrangements.

The family of THOMAS EDMUND BRITT created this Life Tributes page to make it easy to share your memories.

Send flowers to the BRITT family.