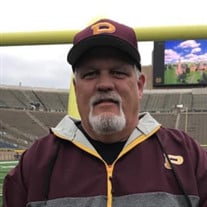 PERRY – Thomas Anthony “Ole Big” Moore, Sr., 58, passed away peacefully on Monday, July 6, 2020, after a brief illness. Everyone is invited to participate in a safe-distance visitation by remaining in the comfort of your vehicle as you drive through the circle driveway at Watson-Hunt Funeral Home to express love, support, and team spirit for his family on Wednesday, July 8, 2020, from 5:00 p.m. until 7:00 p.m. Funeral Services for anyone who would like to attend will be on Thursday, July 9, 2020, at 10:00 a.m. at Southside Baptist Church in Warner Robins. We will practice social distancing, and hand sanitizer stations will be placed throughout the church. If you feel like you are at risk, please wear a facial covering. If you feel sick or have symptoms of an illness, please view the funeral on the church’s Facebook page. Entombment will be in Perry Memorial Gardens in the Dogwood Mausoleum immediately following the funeral service. In lieu of flowers, the family respectfully requests memorial contributions to Perry High School Athletic Department, c/o Kevin Smith, 1307 North Avenue, Perry, GA 31069 or Perry Middle School Athletic Department, c/o Randy Mizell, 495 Perry Parkway, Perry, GA 31069. Thomas was born in Montgomery, Alabama, and graduated in 1980 from Lyman Ward Military Academy in Camp Hill, Alabama. From an early age, he loved sports and always knew he wanted to be a teacher and coach like so many of those who had influenced him along the way. Thomas earned his Bachelor’s Degree from Auburn University at Montgomery and began his career in education in Jones County, Georgia. As a new teacher in the early 1980’s, he worked diligently to create a firm foundation for his career, both in the classroom and on the field. Advancing in his career, he transferred to Upson County where he lived for a number of years. Students loved him and his great sense of humor, and he loved his job. Coach Tommy Perdue at R.E. Lee High School gave him the name “Ole Big,” to which he was lovingly referred by both adults and students. He earned his Master’s Degree from Columbus State University, and Coach Moore mentored his students to be the best they could be. He always offered moral support for students and their families. Mr. Moore earned his Specialist Degree from Troy State University and took the opportunity to work in Houston County as an administrator at Warner Robins High School. He later accepted a leadership position in Macon County where he gained valuable experience and enjoyed touching the lives of so many. He returned to Houston County and served as Principal at Perry Middle School for nearly fifteen years. “Ole Big” became just “Big,” and he retired in 2017 with over thirty years in education. Anytime he could help someone, he would quickly “make a phone call” to one of his “connections,” and it would always work out. He lived and breathed sports, collected various sports memorabilia, and was on a trek to visit all stadiums across the USA. A huge Chicago Cubs fan, he also dearly loved his Auburn Tigers and Perry Panthers. Big could often be found at sporting events cheering for his beloved children, current or former students, and even children of teachers at PMS, to whom he catered and entertained in the mornings as they waited for the bus to take them to their elementary schools. In his time away from school and sports, Big found treasures in others’ junk, especially rusty old signs. Big really was big in so many ways. Whether spending time with his family, attending Southside Baptist Church, walking the hallways, or pacing the sidelines, he left a wonderful legacy for everyone in his life. He was preceded in death by his father, Howard Alton Moore. Left to cherish the memories they made with Thomas are his loving and devoted wife, Melanie Lott Moore of Perry; his children, Tommy Moore and Andy Moore, both of Warner Robins, Mallory Peavy and Allison Peavy, both of Perry; his mother, Dean Moore of Montgomery, Alabama; his sister, Brenda Moore Causey (Ken) of Montgomery; and one niece, Kayla Cause Heartsill (Shaye) of Montgomery. Condolences for the family may be left in the online guestbook at www.watsonhunt.com. Watson-Hunt Funeral Home has been entrusted with the arrangements.

PERRY &#8211; Thomas Anthony &#8220;Ole Big&#8221; Moore, Sr., 58, passed away peacefully on Monday, July 6, 2020, after a brief illness. Everyone is invited to participate in a safe-distance visitation by remaining in the comfort of your vehicle... View Obituary & Service Information

The family of THOMAS ANTHONY "OLE BIG" MOORE created this Life Tributes page to make it easy to share your memories.

Send flowers to the MOORE family.