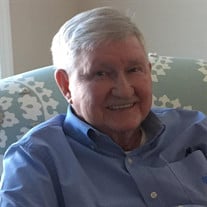 Aaron Lee Gray, 88, passed away peacefully at home on Monday, December 30, 2019, after Alzheimer’s gradually consumed his life for the past six years. A Graveside Service with full military honors will be held on Thursday, January 2, 2020, at the Pavilion in Andersonville National Cemetery, Andersonville, Georgia. In lieu of flowers, the family respectfully requests memorial contributions to Alzheimer’s Association, 886 Mulberry Street, Macon, GA 31201. Aaron was born in Paris, Arkansas, where he grew up one of five children to the late Roy and Ruth Gray. He proudly served our country in the U.S. Air Force during the Korean War and the Vietnam War. He was able to travel and live in various locations through his military duties and, while still at Robins Air Force Base, retired after working over twenty-five years. Soon after, Aaron took a position in Quality Control with Civil Service at RAFB, and he retired, once again, twenty years later. Grandchildren and shopping were two of the things that Aaron enjoyed and loved. He could often be found waiting on grandchildren to be released from school and cherished their time together, listening to the special stories each child would share after long days in class. From school and church activities to ballgames, Aaron loved supporting his grandchildren and family at the events in which they chose to participate. One of his favorite pastimes was shopping. Whether it was putting a grandchild in the buggy and exploring the closest grocery store or heading out with a Christmas list to check off by the deadline, he took great pride in the purchases he made and the gifts he gave and was sure to have fun while shopping. Aaron was a member of Heritage Baptist Church. Left to cherish the memories of “Papa” are his loving and devoted wife of thirty-two years, Brenda Griggs Gray of Perry; his children, Tracy Gray (Jane) of Thomasville, Shirley Mann (David) of Navarre, FL, Casey Gray of Warner Robins, Danny Daws (Nancy) of Hartwell, Donna Brown (Keith) of McRae, and Angie Daws of Perry; ten grandchildren; seven great-grandchildren; and many nieces and nephews. Condolences for the family may be left in the online guestbook at www.watsonhunt.com. Watson-Hunt Funeral Home has been entrusted with the arrangements.

Aaron Lee Gray, 88, passed away peacefully at home on Monday, December 30, 2019, after Alzheimer&#8217;s gradually consumed his life for the past six years. A Graveside Service with full military honors will be held on Thursday, January 2, 2020,... View Obituary & Service Information

The family of SMSgt Aaron Lee Gray, USAF (Ret) created this Life Tributes page to make it easy to share your memories.

Aaron Lee Gray, 88, passed away peacefully at home on Monday,...