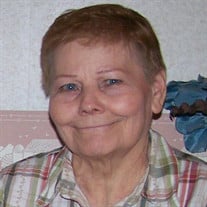 Shirley Clifton West, 80, passed away peacefully on Friday, March 22, 2019. The family will visit with friends on Sunday, March 24, 2019, at 2:00 p.m. in the Chapel at Watson-Hunt Funeral Home. The funeral service will begin at 3:00 p.m. after the visitation at the funeral home. Interment will be in Perry Memorial Gardens immediately following the service. In lieu of flowers, the family respectfully requests memorial contributions to the American Kidney Fund, 11921 Rockville Pike, Suite 300, Rockville, MD 20852. Shirley was born in Pitts, GA, and grew up in Cordele. She had lived in Perry most of her life. Always a homemaker, she volunteered as a Pink Lady at Perry Hospital and was a school crossing guard. For several years, Shirley worked as a Secretary at Goodroe Realty. She enjoyed spending time with her family and had found a passion for oil painting. Shirley was a member of Second Memorial Baptist Church in Perry. She was preceded in death by her mother, Clydie Mae Danforth Daughtery; her father, Tommy Clifton; her infant twin sons, Ranny and Danny West; her beloved husband, Jim K. West; three brothers; and one sister. Left to cherish the memories they made with Shirley are her three daughters, Tara Mixon (Jimmy) of Perry, Wanda West of Goldsboro, NC, and Brenda McIntyre (Tim) of Perry; five grandchildren, Jenny Mixon, Clint Mixon, Haley Medlin, and Billy Medlin, all of Perry, and Cody Lohr (Justin) of Carrollton; one great-granson, Landon McIntyre of Carrollton; her siblings, Ruth Williamson (Horton), Raymond Clifton (Jeannine), Virginia Davis (Tom), and Joann Gray; and several nieces and nephews. Condolences for the family may be left in the online guestbook at www.watsonhunt.com. Watson-Hunt Funeral Home has been entrusted with the arrangements.

The family of SHIRLEY CLIFTON WEST created this Life Tributes page to make it easy to share your memories.

Send flowers to the WEST family.