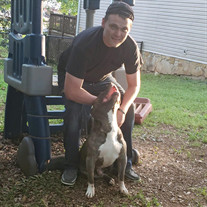 Shawn Luke Jones, 26, passed away unexpectedly on Sunday, November 8, 2020. Services will be held on Saturday, November 14, 2020. Visitation will be at 2:00 p.m. at Watson-Hunt Funeral Home in Perry. Graveside Services will be held at 3:00 p.m. in Perry Memorial Gardens. Shawn was an automotive mechanic and worked at various locations in Middle Georgia. He was very knowledgeable and precise in his work, always making sure that the job he began was completed to the best of his ability. He enjoyed working on old Chevys, but was greater rewarded by repairing cars for other people, especially when that was their only means of transportation. Lending a helping hand to do something for others was his nature, even though he had struggles of his own to take care of through the years. Shawn always maintained a great sense of humor. Growing up as the “test dummy” for his older brothers, he was always excited to be the one to pull the greatest prank on them. A kind person with a big heart, Shawn truly disliked bullies and would be the first to defend the one(s) suffering the wrath of a bully. His greatest joy in life, his daughter, came from his greatest loss, the love of his life, Nicole, who passed away unexpectedly five years ago. Shawn treasured the time spent with his precious child whom he adored, along with the rest of his family who continuously loved him unconditionally. They will dearly miss him. Left to cherish the fond memories they made with Shawn are his beloved daughter, Alaya Nicole Jones; his loving and devoted parents, Rita and Richard Jones of Warner Robins; his brothers and sisters-in-law, Kevin and Shayna Jones of Perry and Phillip and Amanda Jones of Haynesville; his nieces, Kaybrien Jones and Haylee Hill; his nephew, Nathan Jones; his paternal grandfather, Grady Jones; and a host of extended family members. Shawn was preceded in death by his beloved fiancée, Nicole Kimbrell; his long-time, faithful friend and four-legged companion, his Pit Bull, Razor; his paternal grandmother, Sandra Kay Jones; and his maternal grandmother, Helen Masters; and his maternal grandfather Hoyt Chestnut. Condolences for the family may be left in the online guestbook at www.watsonhunt.com. Watson-Hunt Funeral Home has been entrusted with the arrangements.

The family of SHAWN LUKE JONES created this Life Tributes page to make it easy to share your memories.

Send flowers to the JONES family.