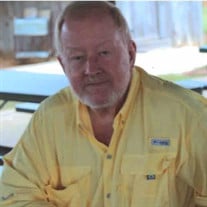 KATHLEEN – Scarborough Dewell Watson, 71, passed away on Friday, April 12, 2019, after an extended illness. Visitation will be held on Monday, April 15, 2019, from 5:00 until 7:00 p.m. at Watson-Hunt Funeral Home in Perry. Funeral Services will be on Tuesday, April 16, 2019, at 3:00 p.m. at Southside Baptist Church Kathleen Campus. Interment will be in Bonaire Cemetery immediately following the service. Dewell, born in Perry on October 31, 1947, was a lifetime resident of Houston County. He graduated from Warner Robins High School with the Class of 1965. He was a Meter Technician for nearly 40 years with Flint Electric, now Flint Energies. In his younger years, he enjoyed playing golf and coaching his son’s youth baseball team. Through the years, he became an avid fan of Braves Baseball, Falcons football, and UGA sports. All of his life, Dewell was very social, never met a stranger, and quickly made new friends everywhere he went. He looked forward to eating out with family every Saturday, and after retirement, he would meet other Flint retirees for breakfast one morning every week. Dewell surprised his family by singing for others later in life, volunteered to sing karaoke, and even won a competition when on a cruise with his wife. He also enjoyed taking care of his “granddog,” Lucy. He cherished the times he spent with his wife, his family, and his friends. He attended Southside Baptist Church Kathleen Campus. Dewell was preceded in death by his father, Candler Scarborough Watson, and his loving and devoted wife of 48 years, Ann Mackey Watson. Left to cherish the memories of Dewell are his children, Kirk Watson (Sunny Brook) of Warner Robins, and Stacey Watson of Kathleen; his grandson who lovingly referred to him as PaPa, Samuel Watson; his mother, Lois Watson of Bonaire; his brother, Doug Watson (Sandy) of Clarkesville; and several nieces and nephews. Condolences for the family may be left in the online guestbook at www.watsonhunt.com. Watson-Hunt Funeral Home has been entrusted with the arrangements.

The family of Scarborough DEWELL Watson created this Life Tributes page to make it easy to share your memories.

Send flowers to the Watson family.