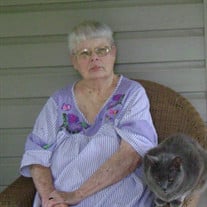 Sarawill Lee Bellamy, 78 of Perry, Georgia, passed away on Thursday, November 5, 2020, after an extended illness. She was born on March 22, 1942, in Tifton, Georgia, to the late Robert Cobb and Louise Sutton Lee. She loved learning, reading, gardening, collecting antiques, and researching genealogy. Sarawill was a member of the Harden United Methodist Church in Tift County. Due to COVID, no services will be held at this time, a small private family service will be held at a later date. In lieu of flowers, Sarawill asked that you save or invest the funds to bring a little more joy to your own golden years. Her first real taste of that academic success came when she received her high school diploma from Tift County High School. She built on that success by earning a Batchelor of Arts Degree in English and Library Science from the Woman’s College, in Milledgeville; and a Master’s Degree in Social Work from the University of Georgia. Sarawill most recently worked as a medical case manager with Intracorp, where she focused on Workman’s Comp Case Management, and prior to earning her Masters, she spent over 20 years employed with the Department of Family and Children Services in North Carolina, where she was a Social Worker II Eligibility Specialist, and investigated child abuse and neglect cases, she also over saw the Foster Care Placement and Recruited Foster Families. Sarawill was a graduate of Hover’s Real Estate School, and later attained a Real Estate Broker’s License, in the State of North Carolina. She was a member of the Daughter’s of the American Revolution, United Daughters of the Confederacy, and was a member of the 4-H and later, became a 4-H Leader. She received many awards and recognition thru the years; Social Worker of the Year, “Order of the Long Leaf Pine” for service to youth by Governor Hunt N.C., Outstanding Young Woman of the Year, and Outstanding Merit Certificates from Intracorp, just to name a few. Sarawill was preceded in death by her husband and the father of her children, Thomas Roger Bellamy. Survivors include sons, William Bellamy (Wendy) of Bonaire, Ga, Daniel Bellamy of Perry Ga; grandson, Brandon Bellamy; and brother, Henry Lee. Watson-Hunt Funeral Home has been entrusted with the arrangements. Condolences for the family may be left in the online guestbook at www.watsonhunt.com.

Sarawill Lee Bellamy, 78 of Perry, Georgia, passed away on Thursday, November 5, 2020, after an extended illness. She was born on March 22, 1942, in Tifton, Georgia, to the late Robert Cobb and Louise Sutton Lee. She loved learning, reading,... View Obituary & Service Information

The family of SARAWILL BELLAMY created this Life Tributes page to make it easy to share your memories.

Sarawill Lee Bellamy, 78 of Perry, Georgia, passed away on Thursday,...

Send flowers to the BELLAMY family.