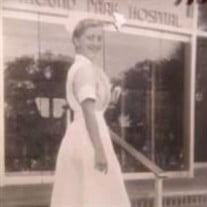 MARSHALLVILLE – Sandra Ann “Sandy” Schwarzkopf Rister, 84, entered fully into the presence of the Lord on May 23, 2021. She peacefully left this earth following a long struggle with Alzheimer’s Disease. Sandy was born in Lansing, Michigan, to the late Joseph Schwarzkopf and the late Martha Hanson Schwarzkopf. She was an honor graduate of Clearwater High School and went on to earn her RN degree from St. Petersburg Jr. College in St. Petersburg, Florida. While in nursing school, she met and married the love of her life, James Rister, who was a young AF airman at the time. She met Jim at a dance organized for the local airmen and the nursing students. Because military life brought travel, Sandy chose to work in some locations while staying home with the children in others. Sandy was a devoted homemaker, continuously working to create a loving, nurturing, and encouraging home in which to raise their daughters. A career air force life brought tours in Germany, California, Delaware, Florida, and Arizona. They were assigned RAFB 3 different times. They decided to make this their home upon Jim’s retirement. Sandy actively volunteered with Meals on Wheels for eight years and was a member of Sandy Valley Baptist Church. Things Sandra enjoyed included her daily Bible study, crocheting, reading, doing Sudoku puzzles, and sewing, a skill she passed on to her daughters. Travel was also a favorite, especially to the beaches of Clearwater where she grew up, and when driving over the causeway approaching Clearwater Sandy would always say, “I feel better already!” She especially delighted in being a Grandma to 5 grandchildren and 4 great-grandchildren and was known for her “famous egg sandwich.” Left to cherish the memories they made with Sandy are her daughters Karen Bryant (Rickey) of Macon, and Janice Davis (Frank Turner) of Ft. Valley; her grandchildren, Chris Bryant (Michelle), Chad Bryant (Christina), and Dr. Joshua Bryant, Cassie Spivey, and Tyler Davis; and four great-grandchildren, Tucker Bryant, Tanner Bryant, Lorelei Bryant, and Genevieve Bryant. Sandy was preceded in death by her parents, Joe and Martha Schwarzkopf, of Clearwater, FL ; her beloved husband of sixty years, James Rister; and her sister, Joanne Shultz, of Michigan. Special thanks and appreciation go to the loving staff of The Oaks Nursing Home in Marshallville where Sandy was cared for nearly two years, and the loving staff of Antebellum Grove Assisted Living where Sandy was taken cared of for three-and-a-half years. A visitation to express love and support for Sandy’s family and friends will be held on Thursday, May 27, 2021 from 4:00 to 6:00 p.m. in the Chapel at Watson-Hunt Funeral Home. A private graveside service will be held in Andersonville National Cemetery in Andersonville, Georgia. In lieu of flowers, the family respectfully requests donations in memory of Sandra Rister to Alzheimer’s Association, 886 Mulberry Street, Macon, GA 31201. Condolences for the family may be left in the online guestbook at www.watsonhunt.com. Watson-Hunt Funeral Home has been entrusted with the arrangements.

The family of SANDRA "SANDY" RISTER created this Life Tributes page to make it easy to share your memories.

Send flowers to the RISTER family.