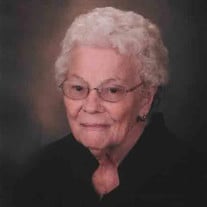 PERRY- Ruby Bolan Collier Nelson, 95, passed away peacefully on Monday, October 21, 2019. The family will visit with friends on Friday, October 25, 2019, from 1:00 until 2:30 p.m. in the Chapel at Watson-Hunt Funeral Home. A Graveside Service will be held on Friday, October 25, 2019, at 3:00 p.m. at Oaklawn Cemetery in Ft. Valley. Officiating the service will be Pastor James Parker and Pastor Alma Parker of In His Glory Praise and Worship Center in Perry. Mrs. Ruby was born in Macon County, Georgia, the only child of Vince and Lucile Lacey Bolan. After high school, she married Harvey Collier. The couple had seven children and lived in Fort Valley. Suddenly, Mrs. Ruby found herself a young widow raising her children. God’s plan for her life became clear when she married Melvin Nelson and had three more children with him. A homemaker all of her adult life, her children were her whole world. She enjoyed having them all at her house for holidays and special occasions, especially once they all began having children of their own. She had lived in Perry for the past 62 years, and was a long-time member of First Baptist Church of Perry. Mrs. Ruby was preceded in death by Harvey Collier, her husband of 12 years; Melvin Nelson, her husband of 62 years; two daughters, Shirley Horne and Diann Vantrease; and two sons, Ronnie Collier and Alan Nelson. Left to cherish the memories they made with Mrs. Ruby are her children, Martha Scott, Gene Collier, Gail Moll, Kenny Collier, Beverly Nelson Wilson, and Craig Nelson; many, many grandchildren; lots of great-grandchildren; and several great-great-grandchildren. Condolences for the family may be left in the online guestbook at www.watsonhunt.com. Watson-Hunt Funeral Home has been entrusted with the arrangements.

PERRY- Ruby Bolan Collier Nelson, 95, passed away peacefully on Monday, October 21, 2019. The family will visit with friends on Friday, October 25, 2019, from 1:00 until 2:30 p.m. in the Chapel at Watson-Hunt Funeral Home. A Graveside Service... View Obituary & Service Information

The family of Ruby Bolan Collier Nelson created this Life Tributes page to make it easy to share your memories.

Send flowers to the Nelson family.