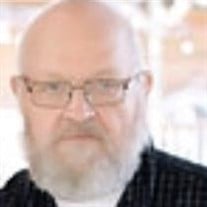 Roy Gene Williamson, 76, passed away peacefully surrounded by his loving family on Monday, June 24, 2019. Visitation will be held from 10:00 a.m. to 11:00 a.m. on Friday, June 28, 2019, at First Baptist Church of Perry with Funeral Services to follow at 11:00 a.m. Interment with military honors will be held in The Pavilion at Andersonville National Cemetery at 2:00 p.m. Roy, was born in Springfield, Illinois to the late Robert Earl and Esther Mearl Calhoun Williamson. He enlisted in the Army following high school. During his time in Vietnam, Roy served as a radio operator and a cook. What began as a job grew into much more and he developed a true love of cooking. His family remembers him baking do-nuts, making homemade salsa, barbeque sauce, and chow-chow. Roy took his talents beyond the kitchen, where he tended to his tomato and pepper garden. He told his family that if you place matchsticks in the dirt it’ll make the peppers hotter and he would usually get a stranger to do a taste test. Roy spent time at Robins Air Force Base in civil service as an aircraft mechanic, primarily focusing on the wiring in the tail of the C-130 aircraft carrier, and then went on to finish his career working with Lockheed-Martin in multiple states. After he was officially retired, he created beautiful handmade walking canes out of walnut. Roy was an avid reader and an amazing story-teller. He always asked “Can I keep your smile?” wherever he went. Roy was a proud member of the American Legion post 172 and a graduate of DeVry University. Along with his parents, Roy was preceded in death by his loving wife of fifty years, Malinda Barnett Williamson; his siblings, Richard Williamson, David Williamson, and Eleanor Williamson. Left to cherish the memories they shared with Papa Roy are his sons and daughters-in-law, Michael and Shari Williamson of McDonough, and Robbie and Regina Williamson of Bonaire; his grandchildren, Hunter Lyn Parker (Andrew), Zac Williamson, Ben Curry, Brandon Williamson, Leigh Williamson, and Molly Williamson; his siblings, Dottie Milner (Chuck), and Mary Anne Andrews; his sister-in-law, Donna Williamson; and several nieces and nephews. Condolences for the family may be left in our online guestbook at www.watsonhunt.com. Watson-Hunt Funeral Home has been entrusted with the arrangements.

The family of Roy Gene Williamson created this Life Tributes page to make it easy to share your memories.

Send flowers to the Williamson family.