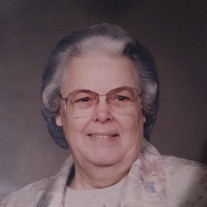 PERRY – Rowena Harriette Miller Click, 93, passed away peacefully on Wednesday, November 25, 2020, surrounded by her beloved daughters. Funeral Services will be on Saturday, November 28, 2020 at Christ’s Sanctified Holy Church. The Viewing will be from 10:00 a.m. until 12 Noon, the hour at which the Funeral will begin. Interment will be in the Christ’s Sanctified Holy Church Cemetery immediately following the service. Anyone who would like to attend may do so, however, facial coverings are required. Rowena was born in Jacksonville, Florida, to the late Frank William and Rowena “Rena” Brush Miller. She was born and raised in Christ’s Sanctified Holy Church, and became Sanctified in Norfolk, Virginia, as a young teenager. She raised her children in CSHC and was always steadfast and dedicated to her church and her church family. Rowena married the love of her life, Raymond Lester Click, in 1944 in Perry. The couple lived in the Atlanta area until 2001, moved outside the perimeter and lived in Watkinsville and Winder, before returning to where their marriage began, Perry, to live out their final years together in the Church Home for the Aged. Through the years, Rowena enjoyed her time as a Lunchroom Assistant for the Dekalb County School System and retired after twenty-five years of dedicated service to the kids she fed and loved every day. After spending some time with Lester in retirement and moving again, Rowena accepted a position with the Nutrition Department for Rockdale County School System, where she worked for an additional ten years serving children and smiling through every day. Once again, she retired, at 80 years old, and received an award as being the oldest employee in Rockdale County School System. As time took its toll on Mrs. Rowena, Alzheimer’s began to gradually take her memories, and she became settled and content at the Church Home. Rowena was always known as a lady who lived the life she professed to live, as a Christian and Sanctified lady. She was sure to be complete and made whole again as she entered the gates of Heaven greeted by Jesus and her beloved Lester. Left to cherish the memories they made with Mrs. Rowena are her daughters, Harriette Ferguson (Bill) of Conyers, Juanita Prince of Covington, and Jan Inboden (Ken) of Milledgeville; eight grandchildren; fifteen great-grandchildren; five great-great-grandchildren; and a host of nieces, nephews, and friends. She was preceded in death by her parents; her siblings, two infant sisters, Bill Miller, Frank Miller, George Miller, Charles Miller, and Fannie Ruth Smith; her loving and devoted husband of over seventy years, Raymond Lester Click; and her son-in-law, Rod Prince. Condolences for the family may be left in the online guestbook at www.watsonhunt.com. Watson-Hunt Funeral Home has been entrusted with the arrangements.

The family of ROWENA MILLER CLICK created this Life Tributes page to make it easy to share your memories.