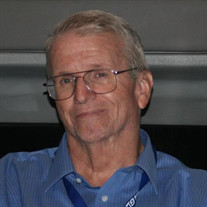 PERRY- Roger Warren “Rod” Watson, 68, passed away on September 27, 2021, in Perry, Georgia. Due to Covid, there will not be a service. The family respectfully requests memorial contributions to the homeless ministry, Family Promise of Greater Houston County, 2762 Watson Blvd, Warner Robins, Ga 31093. Roger was born in Dublin, Georgia, to Sheryll Smith Watson Tiller and Roger Warren Watson, both of whom predeceased him. Rod often spoke of his mother’s excellent cooking skills, especially her homemade fudge. He also laughingly described the family’s demolition derby participation and fishing trips. Roger graduated from Northside High School (1971) in Warner Robins and then moved to Atlanta. He earned an engineering degree from the Georgia Institute of Technology and, while in Atlanta, he worked as a bridge examiner. He eventually moved to California, where he spent approximately 25 years working as a surveyor/engineer. Roger donated much time in Atlanta and California as an advocate for the homeless. Roger was a knowledgeable sports fan, always following the Yellow Jackets and Falcons, and many other teams in numerous sports. He particularly enjoyed debating the virtues of the Jackets vs. the Dawgs within a predominantly UGA family. Roger returned to his home in Middle Georgia after retiring from his position with D.L. Horton Homes. At that time, he was disabled and confined to his electric chair; however, his physical limitations did not stop him from living a very active and independent life. He pulled together the 30th Reunion of Northside High School’s class of 1971 by working tirelessly on the Reunion Committee, constantly searching to locate classmates. He started the NHS Class of 71 Facebook page so classmates could stay in touch. Genealogy, history, and reading were other pastimes enjoyed by Rod. Rod was a family man and was very close to his brother, Richard, and sister-in-law Christine, and their family. Sadly, Richard died in 2020. Rod is survived by one sister, Holly Ann Brady (Frank) and one brother, Gifford Tiller (Susan), both of Warner Robins; several nieces, nephews, and cousins; one uncle; and several aunts. Rod’s faith brought him through very hard times physically. Even through the years of incapacitation, he still found ways to serve and minister to anyone and everyone who spent time with him. Philippians 4:11-13 KJV…I have learned, in whatsoever state I am, therewith to be content. I know both how to be abased, and I know how to abound: everywhere and in all things, I am instructed both to be full and to be hungry, both to abound and to suffer need. I can do all things through Christ which strengtheneth me. Condolences for the family may be left in the online guestbook at www.watsonhunt.com. Watson-Hunt Funeral Home in Perry has been entrusted with the arrangements.

PERRY- Roger Warren &#8220;Rod&#8221; Watson, 68, passed away on September 27, 2021, in Perry, Georgia. Due to Covid, there will not be a service. The family respectfully requests memorial contributions to the homeless ministry, Family Promise... View Obituary & Service Information

The family of ROGER WATSON created this Life Tributes page to make it easy to share your memories.

Send flowers to the WATSON family.