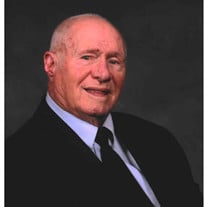 ELKO – Roger Allen Harrold, 86, left his earthly house and entered his forever home, joining his beloved wife in Heaven, on Wednesday, February 26, 2020. While his daughters, who were at his side when he took his last breath, will miss him dearly, the family finds comfort in knowing that Roger and Helen are united again, this time for eternity. Visitation will be held on Sunday, March 1, 2020, from 5:00 p.m. until 7:00 p.m. at Watson-Hunt Funeral Home. Funeral Services will be held on Monday, March 2, 2020, at 1:00 p.m. at Crossroads United Methodist Church in Perry. Interment at Woodlawn Cemetery will be Private. Memorial contributions may be made to Crossroads United Methodist Church, 1600 Main Street, Perry, GA 31069. Roger was born in Findlay, Ohio, to the late Clarence and Mary Longbrake Harrold where he grew up. He married the love of his life, Helen Radabaugh, soon after they turned 19. The couple moved to Clearwater, Florida, where they settled, raised their children, and lived for 42 years. Roger was a mechanic and eventually the manager of a Midas Muffler shop there. He enjoyed working and supporting his family. Roger loved the Lord Jesus, his family, and his churches dearly. With a servant’s heart, his ministry was serving others. He truly enjoyed seeing others happy. He was a long-time member of Skycrest Baptist Church in Clearwater where he was a nursery worker and coordinator. Roger loved children, and when he started having grandchildren of his own, his heart overflowed with love. At one point in his life, Roger began helping people cut their grass, especially widows, and became a “handy man” for those in need of odd jobs being completed around their homes. As his and his wife’s mothers became widows, too, the couple decided to move back to Findlay, Ohio, to become caregivers for both mothers before relocating to Elko, Georgia, in 2005 to be near their children and grandchildren. Roger and Helen moved their membership to Crossroads United Methodist Church in Perry, and they were members of the Searchers Sunday School Class and a small group Bible Study. Throughout his life, he delighted in cooking for and serving others. His specialties were pies, buckeyes, and fish fries, not necessarily in that order, but he was always cooking something sweet or cooking the catch from the latest fishing adventures with his grandchildren and great-grandchildren. Most recently, Roger treated his church friends with a fish fry to celebrate his 86th birthday. He enjoyed every single minute of it – from cooking, to serving, to seeing happiness, to worshipping together one last time. Roger was preceded in death by his parents; his beloved wife of 63 years, Helen; his three brothers, Richard Harrold, Robert Harrold, and Ronald Harrold. Left to cherish the memories of Roger are his loving and devoted daughters, Sheila Gentry (Roy) of Elko, and Dana Bittner of Perry; his grandchildren, Lisa Deal (Danny), Daniel Gentry (McKenzie), Mary Bixler (Jamie), Katie Gentry, Bethany Gentry, Jerod Bittner, Ann Lester (Joe), and Joshua Bittner (Brook); eight great-grandchildren; his sister, Janice Goble of Findlay, Ohio; his brother-in-law, Howard Radabaugh; his sister-in-law, Elaine Marquart (Jay); and many nieces, nephews, great-nieces, and great-nephews. Condolences for the family may be left in the online guestbook at www.watsonhunt.com. Watson-Hunt Funeral Home has been entrusted with the arrangements.

ELKO &#8211; Roger Allen Harrold, 86, left his earthly house and entered his forever home, joining his beloved wife in Heaven, on Wednesday, February 26, 2020. While his daughters, who were at his side when he took his last breath, will miss... View Obituary & Service Information

The family of Roger Harrold created this Life Tributes page to make it easy to share your memories.

Send flowers to the Harrold family.