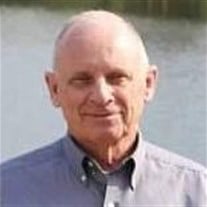 FERNANDINA BEACH, FL – Rodger Orval Woltjer, 78, passed away unexpectedly on Friday, November 8, 2019, after complications from open heart surgery last week. A Funeral Mass will be Celebrated on Friday, November 15, 2019, at 11:00 a.m. at St. Patrick Catholic Church in Kathleen, Georgia. Visitation will be held at the church at 10:00 a.m., one hour prior to the service. Interment with full military honors will also be held on Friday, November 15, 2019, at 2:00 p.m. at the Pavilion in Andersonville National Cemetery. In lieu of flowers, the family respectfully requests memorial contributions to Folds of Honor at www.foldsofhonor.org, Stephen Siller Tunnel to Towers Foundation at www.tunnel2towers.org, or the donor’s favorite military charity. Rodger was born in Alexandria, Louisiana, to the late Edward and Doris Rohen Woltjer. His family moved to Grand Rapids when Rodger was an infant, where he lived until 2001. A graduate of Rogers High School, he attended Grand Rapids Community College, earned a Bachelor’s Degree at Calvin College, and went on to earn a Master’s Degree from Michigan State University. Rodger proudly joined the Michigan National Guard in 1966, served sixteen years then joined the U.S. Army Reserves. After having proudly and honorably served his country for another sixteen years, he retired as a Colonel. During his thirty-two years in the military, Rodger worked as a Chemist and a Science Teacher. Upon retirement, he authored several books on military history, including Military History of the United States and several books detailing the various Army Support Services during the American Civil War. Rodger and his wife spent five years living in Perry, Georgia, near their youngest daughter, and were active in St. Patrick Catholic Church in Kathleen. For the past two years, they have lived in Fernandina Beach, Florida, enjoying the year-round warm weather. A dear husband, loving father, and wonderful grandfather, he will be greatly missed by all those who had the pleasure of knowing him. Left to cherish the memories they made with Rodger are his loving and devoted wife of 54 years, Katherine Woltjer of Fernandina Beach, FL; his daughters and sons-in-law, Michelle and Jim Liggett of Allegan, MI, Susan and Bryan Darrah of Lexington, KY, and Jennifer and Mike Lewis of Hawkinsville, GA; three grandchildren, Austin Darrah and Tyler Darrah of Lexington, KY, and Madison “Mattie Jo” Lewis of Hawkinsville, GA; his siblings, David Woltjer (Nancy) of Hastings, MI, Lois Ann Woltjer of Dorr, MI, Norman Woltjer (Jan) of Jenison, MI, and Kathy Laukert (George) of Kalamazoo, MI; and several nieces and nephews. Condolences for the family may be left in the online guestbook at www.watsonhunt.com. Watson-Hunt Funeral Home has been entrusted with the arrangements.

The family of Rodger Orval Woltjer created this Life Tributes page to make it easy to share your memories.

Send flowers to the Woltjer family.