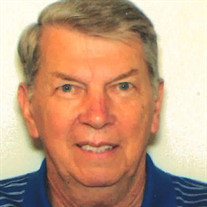 MACON – The Patriarch of the Wright Family of 26, Robert Lee “Bob” Wright, passed away peacefully at Pine Pointe Hospice early Friday morning after a brief illness. He was affectionately known as Roberto, Daddy, Pops, Papa, and Poppy to his loving wife of seventy-one years, Ellen; his six children, Karen and Tommy David, Leroyce and Gary Wright, and Nancy and Greg Wright; his twelve grandchildren, Katie and Mack Mendenhall, Josh Wright, Mollie and Jimbo Graves, Margaret and Jarrod Wright, Maggie and Bill Millen, Zac Wright, Sashi Wright, and Noah Wright; and six great-grandchildren, Grace Mendenhall, Maya Graves, Jenna Mendenhall, Micah Graves, Emmie Wright, and Rhodes Wright. His love for his family was second only to his love for his Lord. When his time was drawing short, he told us that he was going to his “real home,” which was in Heaven with Jesus. He said that he would be waiting to welcome each of his family members to Heaven – but not anytime soon. Bob was born and raised in Perry, Georgia, graduated from Perry High School, and attended Georgia Military College. He proudly served our country in the United States Coast Guard for four years. While stationed in New York, he met and married the love of his life, Ellen Schnabel. After his service in the Coast Guard, part of it during the Korean Conflict, he served an additional four years in the U.S. Coast Guard Reserves. The couple subsequently moved to Perry where they lived for sixty-three years. During that time, Bob worked for Civil Service as a Logistics Manager at Robins Air Force Base from where he retired after thirty-four years. Upon his retirement, Bob did some subdivision development in Perry. He enjoyed watching sports, particularly the Georgia Bulldogs. Bob and Ellen have lived in Macon for the past five years. In lieu of flowers, the family respectfully requests memorial contributions to Perry Presbyterian Church, 1111 South Second Street, Perry, GA 31069 or the charity of the donor’s choice. A Graveside Service will be held for the family. A Service of Thanksgiving and Celebration for Bob’s Life will be held at a later date. The details of such service will be announced in ample time, so that those wishing to attend may make plans. Condolences for the family may be left in the online guestbook at www.watsonhunt.com. Watson-Hunt Funeral Home has been entrusted with the arrangements.

The family of ROBERT LEE "BOB" WRIGHT created this Life Tributes page to make it easy to share your memories.

MACON – The Patriarch of the Wright Family of 26, Robert Lee...

Send flowers to the WRIGHT family.