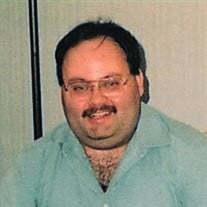 PERRY – Robert Lee “Robby” Sammons, 49, formerly of Princeton, West Virginia, went to be with his Lord and Savior on Sunday, October 3, 2021, after a brief illness. Services will be held on Saturday, October 9, 2021, at Watson-Hunt Funeral Home in Perry. The Visitation will begin at 1:00 p.m. and the Funeral will start at 2:00 p.m. Burial will be in Perry Memorial Gardens immediately following the service. Robby was born in Princeton, West Virginia on June 7, 1972, to the late Lee Sammons and Bonnie Sammons of Perry, Georgia. He and his family moved to Perry in 1980. He was a graduate of Perry High School. He achieved an Associate’s Degree in Computer Science from Georgia Southwestern College in Americus, Georgia. He was employed by Bridgestone Company as their tires sales manager. He loved spending time with his family. On a recent trip to Princeton, West Virginia in July of this year with his mom, he really enjoyed the time he got to spend with Aunt Linda and Uncle Curtis and his cousins. His hobbies were target shooting, collecting eagles, and playing video games. He also loved to read and had read thousands of books. Robby was preceded in death by his father, Lee Sammons and his brother, Reverend Johnny Sammons. Left to cherish the memories they made with Robby are his mother, Bonnie Sammons of Perry; nephews, Jesse Sammons, Matthew Sammons; great-nephew Jackson Sammons and sister-in-law, Susan Funderburk Sammons, all of Perry; his Aunt and Uncle, Linda and Curtis Ball of Princeton, West Virginia; and several cousins. Robby is greatly missed by all who knew and loved him. Condolences for the family may be left in the online guestbook at www.watsonhunt.com. Watson-Hunt Funeral Home has been entrusted with the arrangements.

The family of ROBERT "ROBBY" LEE SAMMONS created this Life Tributes page to make it easy to share your memories.

Send flowers to the SAMMONS family.