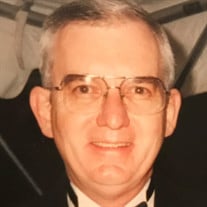 PERRY – James Robert Fudge, III, 75, passed into the hands of God on Friday, October 18, 2019. A Private Interment will be held in Woodlawn Cemetery. A Memorial Service to celebrate Robert’s life will be held on Tuesday, October 22, 2019, at 11:00 a.m. at Perry Presbyterian Church. Visitation will immediately follow the service at the church. In lieu of flowers, the family respectfully requests memorial contributions to Perry Presbyterian Church Building Fund, 1111 Second Street, Perry, GA 31069. A lifelong resident of Perry, Robert was the son of James Robert Fudge, Jr. and Iris Mathews Fudge. A graduate of Perry High School, he was employed for 46 years by Blue Bird Body Company in Fort Valley, first as a Draftsman and ultimately as a Senior Project Engineer. He was also a lifelong member of Perry Presbyterian Church. Robert was a lover of the outdoors and a fixer of all things. Left to cherish the memories they made with Robert are his loving and devoted wife of nearly 56 years, Carol McKinley Fudge; his son, James Robert “Jim” Fudge, IV, of Aiken, SC; his daughter and son-in-law, Catherine F. “Cathy” and Steve Howe of Elberton, GA; his grandchildren, Sara Howe, Elliot Fudge, and Kelsey Fudge. He is also survived by his sister, Mary Fudge Anderson of Hollywood, MD; his nephew, Mark McCann; and his feline companion, Allie. Condolences for the family may be left in the online guestbook at www.watsonhunt.com. Watson-Hunt Funeral Home has been entrusted with the arrangements.

PERRY &#8211; James Robert Fudge, III, 75, passed into the hands of God on Friday, October 18, 2019. A Private Interment will be held in Woodlawn Cemetery. A Memorial Service to celebrate Robert&#8217;s life will be held on Tuesday, October... View Obituary & Service Information

The family of Robert Fudge created this Life Tributes page to make it easy to share your memories.

Send flowers to the Fudge family.