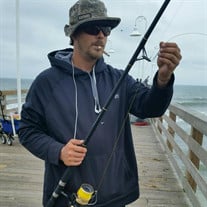 DAYTONA BEACH, FL – Robert Clifton Irwin, Jr., 30, passed away on April 13, 2019. The family will visit with friends at Watson-Hunt Funeral Home in Perry on Saturday, April 27, 2019, from 1:00 until 2:00 p.m., at which time a Memorial Service will begin. A Private Inurnment will be in Walnut Cemetery. Rob was born in Daytona Beach, Florida, on December 10, 1988. Shortly after he was born, his family moved to Perry, Georgia, where he grew up. Rob returned to Daytona and worked as a Maintenance Technician for a rental property group. He loved spending time with his family when he could, but his passion in life was fishing which he did nearly every single day. He was preceded in death by his maternal grandfather, Dennis “Pete” Stubbs; and his paternal grandparents, Billy and LaRue Irwin. Left to cherish the memories they made with Rob are his Mom, Connie Stubbs Irwin of Buffalo, New York; his Dad, Bobby Irwin, Sr. of Perry; his maternal grandmother, Betty Jean Smallwood Stubbs of Perry; and numerous aunts, uncles, and cousins. Condolences for the family may be left in the online guestbook at www.watsonhunt.com. Watson-Hunt Funeral Home has been entrusted with the arrangements.

The family of Rob Irwin created this Life Tributes page to make it easy to share your memories.

Send flowers to the Irwin family.