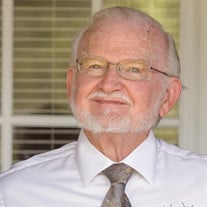 HENDERSON – Reverend Howard E. Alford, 85, went Home to be with his Lord and Savior Jesus on January 23, 2021. Graveside Services will be held on Thursday, January 28, 2021, at 3:00 p.m. at the Buckhead Cemetery in Morgan County, Georgia, near Madison. Considering the current Covid pandemic, please wear a mask for the protection of everyone there. Howard was born on December 13, 1935, in Washington County, Georgia, was raised in Morgan County, and graduated from Morgan County High School. Afterwards, he enlisted in the United States Air Force where he proudly served his country. When his enlistment was completed, he went to work for First National Bank in Madison, where he was promoted to the Head Teller position. He attended the University of Georgia School of Business while working at the Bank. He was very involved in community service both through his home church, Buckhead Baptist Church, and as a member of the Lions Club, rising to the office of District Governor in 1970. In 1972, he enlisted in another Army, surrendering to God’s call to full-time ministry. He left his position at the bank and moved to New Orleans, Louisiana, to attend Seminary. After graduating, Rev. Alford returned to Georgia where he pastored his first church, Shiloh Baptist Church in Thomaston. He then pastored First Baptist Church in Brooklet, moved to Bonnybridge Baptist Church in Port Wentworth, then Henderson Baptist Church in Henderson, and eventually served at Drayton Baptist Church in Dooly County, Georgia. After pastoring established churches for many years, he was called by God to begin planting churches. He subsequently planted the New Harvest Baptist Church in Cordele, and then answered God’s call to plant and pastor the Peytona Baptist Church in Peytona, West Virginia. Returning home to Henderson due to his wife’s serious illness, he retired to care for her full-time. Even though retired, his strong desire to serve others led him to create the Fields of Harvest ministry to fight hunger in the mountains of West Virginia. Rev. Alford was described by all who knew him as a Godly man, kind and gentle to everyone. He will be sorely missed by all who knew him, but we rest secure in the knowledge that he is with His Lord Jesus. Rev. Alford was preceded in death by his parents, Emmitt and Susie Harwood Alford; his sisters, Caroline Alford and Linda Ashby; and his wife of thirty-four years, Nancy Nunnally Alford. Rev. Alford is survived by his wife of twenty-six years, Twala Ligon Alford of Henderson; sons, Russ Alford (Pam) of Henderson, and Rob Alford (Wanda) of Brooklet; his grandchildren, Christopher Alford (Katy) of Powder Springs, Stephanie Johnson (Shawn) of Perry, Brooke Osborne (Brent), Morgan Alford and Layne Alford, all of Brooklet; three great-grandchildren, Lily and Bowen Alford and Charlie Johnson; his sister, Violet Harris; and his brother, Harold Alford. Condolences for the family may be left in the online guestbook at www.watsonhunt.com. Watson-Hunt Funeral Home has been entrusted with the arrangements.

The family of REV. HOWARD E. ALFORD created this Life Tributes page to make it easy to share your memories.

Send flowers to the ALFORD family.