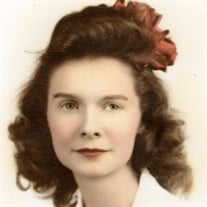 PERRY – Pheraby Eugenia Baldwin Smith, 95, passed away peacefully on Monday, June 21, 2021, surrounded by her loving family. A private Graveside Service was held for the family on Wednesday, June 23, 2021, in Perry Memorial Gardens where she was laid to rest by her beloved husband. In lieu of flowers, the family respectfully requests contributions to the donor’s favorite charity in memory of Mrs. Pheraby. Pheraby was the daughter of the late Lida Bassett Baldwin and Benjamin Ray Baldwin. She grew up in Memphis, Tennessee, where she attended and played tennis for Memphis State University. Pheraby transferred after two years to the University of Georgia in Athens, where she met the love of her life, Felix Smith, and graduated with a B.S. in Education. Felix and Pheraby married in Athens in 1950 and moved to Perry for Felix to begin Perry’s first veterinary practice. Pheraby taught 4th grade at Perry Grammar School until her role as homemaker and mother took precedence. She loved every moment of taking her children to their various sports practices and games, and making sure that the home in which they were raised was filled with Christianity, love, and encouragement. Pheraby was a long-time member of Perry United Methodist Church and the Howell Cobb Sunday School Class. Through the years, she was also an active member of the Daughters of the American Revolution, the VFW Ladies’ Auxilliary, the Perry Tawasi Club and the Sorrelle Club of Perry, both service leagues supporting the community. Pheraby was preceded in death by her loving husband of fifty-nine years, Dr. Felix M. Smith, Sr. Left to cherish the memories they made with Pheraby are her loving and devoted children, Lida Lafferty (John), India Smith (Eileen), Dr. Felix Smith, Jr., and Dr. Ben Smith (Susan); her grandchildren, Krista N. Zodarecky (Matt), Jenifer Pheraby Hofstadter (Chad), Benjamin B. Smith, Jr. (Jenna), and Jon Wesley Lafferty (Carly); and four great-grandchildren. Condolences for the family may be left in the online guestbook at www.watsonhunt.com. Watson-Hunt Funeral Home has been entrusted with the arrangements.

The family of PHERABY EUGENIA SMITH created this Life Tributes page to make it easy to share your memories.