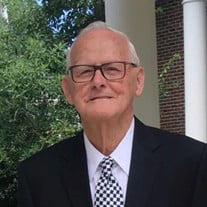 PERRY, GA- Pete Burgess Harris, 92, passed away peacefully on Thursday, May 28, 2020. A Graveside Service will be held on Sunday, May 31, 2020, at 11:00 a.m. in the Cemetery at Christ’s Sanctified Holy Church Campground. We will be respecting the social distancing regulations from our governor at the graveside and in the cemetery. Pete was born in Old Trap, North Carolina to the late Sanford and Janie Burgess Harris. After graduation from high school, he proudly served our country in the U.S. Army. Upon his honorable discharge, he accepted a position with Civil Service in Norfolk, Virginia, as a Naval Supply Clerk. He married the love of his life, Betty Greer, and the couple lived and raised their children in Virginia. Pete worked hard and developed a successful career holding various other positions with Civil Service along the way and retired after over thirty years of service. A long-time member of Christ’s Sanctified Holy Church, Pete and Betty moved to the Church Campground in Perry, Georgia, in 2006. After Betty passed away in 2008, Pete stayed close to his family, friends, and “brothers and sisters in Christ” at the Campground until his health began to decline. In December of 2019, he moved to the Campground’s Church Home where he would live until he joined his Heavenly Father and his beloved wife last Thursday. Pete was preceded in death by his parents; an infant child, William Murphy Harris; his brother, Richard Harris; his sister, Annibelle Harris Mitchell; his loving and faithful wife of over fifty years, Betty Greer Harris; and his son, George Harris. Left to cherish the memories they made with Pete are his caring and devoted daughter and son-in-law, Judy and Josh Simons, of Raleigh, NC; his grandchildren, Christen Simons Stevens (Garth) of Raleigh and Josh Simons (Libby) of Chesapeake, VA; his great-grandchildren, Avery Stevens, Saylor Stevens, Joshua Simons, and Lincoln Simons; and several nieces and nephews. Condolences for the family may be left in the online guestbook at www.watsonhunt.com. Watson-Hunt Funeral Home has been entrusted with the arrangements.

The family of PETE BURGESS HARRIS created this Life Tributes page to make it easy to share your memories.

Send flowers to the HARRIS family.