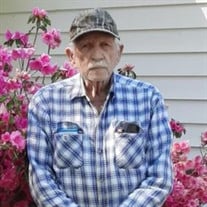 Jr. Streetman, 89, passed away peacefully on Friday, August 13, 2021, less than a year after losing his wife, Dolly Kate. Funeral Services will be held on Monday, August 16, 2021, at 2:00 p.m. at First Baptist Church of Haynesville with Reverend David Fisher officiating. The family will receive friends at the church one hour prior to the service, from 1:00 until 2:00 p.m. Jr. will be laid to rest in Perry Memorial Gardens immediately following the service. He was born in Ellaville, Georgia, to the late Perry Thomas Streetman, Sr. and the late Mattie Susie Eason Streetman. Shortly after graduating from Ellaville High School, he began working with his father where he became skilled in maintenance and electrical work. A lifelong resident of this area, he established his own electrical business. For many years, he “kept the lights on” for Perry residences and businesses. Prior to retirement, he spent eleven years working in maintenance for the McEver Probation Detention Center. First Baptist Church of Haynesville was Jr.’s church home. He enjoyed going fishing whenever he could. He was preceded in death by his parents, Perry Thomas Streetman, Sr. and Mattie Susie Eason; his beloved wife of sixty-seven years, Dolly Kate McDowell Streetman; a sister, Mary Belle Ragen; and a brother, Burnette Streetman. Left to cherish the memories they made with Jr. are his loving and devoted sons, Perry T. Streetman, III (Peggie Bembry Johnson) and Ken Streetman (Lia); his grandchildren, Joshua Streetman, Travis Streetman (Amber), Cole Streetman; his great-grandchildren, Emma Streetman, Lily Streetman, Walker Streetman, Laci Mullis, Krista Quick, and Austin Mullis; his brother, Boyette Streetman; his sister, Minnie Sue Jordan; and several nieces and nephews. Condolences for the family may be left in the online guestbook at www.watsonhunt.com. Watson-Hunt Funeral has been entrusted with the arrangements.

Jr. Streetman, 89, passed away peacefully on Friday, August 13, 2021, less than a year after losing his wife, Dolly Kate. Funeral Services will be held on Monday, August 16, 2021, at 2:00 p.m. at First Baptist Church of Haynesville with Reverend... View Obituary & Service Information

The family of PERRY THOMAS STREETMAN JR created this Life Tributes page to make it easy to share your memories.

Send flowers to the STREETMAN family.