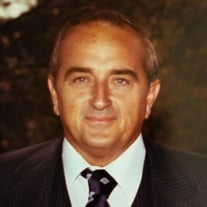 FT. VALLEY- Paul Anthony Copeland, 87, passed away peacefully on Tuesday, February 25, 2020, just days before his 88th birthday. The family will greet friends on Sunday, March 1, 2020, at 11:00 a.m. followed by the Funeral Service at 2:00 p.m. in the Chapel at Christ’s Sanctified Holy Church. Interment will be in the Campground Cemetery immediately following the service. Paul was born in Bona Bella, Georgia to the late K.V. and Katherine Arnold Copeland. While he suffered with polio as a young child, he remained brave, courageous, and extremely positive throughout his entire life. Paul married the love of his life, Mary Ellen Kelly, and the two were married for 51 years. During that time, she would encourage him to grow his business, which he did with great pride. He was a building and painting contractor, mentoring many young construction workers to be ethical and dedicated like the example he set for them daily. Paul and his crews did a lot of work along the coast near Charleston. He retired from construction in 2005. While a hard-worker in whatever he did, Paul often enjoyed relaxation and vacation time with his family, as well. Fishing, crabbing, shrimping, and finding oysters were among some of his favorite things to do while spending time near the water, and he would set up a cooker on the bank of the shore in an instant to enjoy the freshest seafood possible. Always health conscious, Paul took pride in planting, nurturing, and growing various vegetables in his backyard in order to enjoy them in a fresh, crispy salad whenever he wanted, which was usually every day. He was full of energy and had a sparkle in his eye, especially when bragging on or spending time with his grandchildren. Paul was a long-time, active member of Christ’s Sanctified Holy Church. He was preceded in death by an infant son, Paul Anthony Copeland, Jr.; his parents; his beloved wife, Mary Ellen Copeland; and his three sisters, Nina Childress, Katherine Marcus, and Mildred Davidson. Left to cherish the memories they made with Paul are his son and daughter-in-law, Glenn and Anita Copeland of Perry; his daughter and son-in-law, Barbara and Eddie Bedwell of Raleigh, NC; four grandchildren, David Copeland and wife, Amy, Diana Bryant and husband, Justin, Stephen Copeland and wife, Sarah, and Ashley Murphy and husband, Dustin; nine great-grandchildren; a sister-in-law, Lawanna Welch; and several nieces, nephews, and other extended family members. Condolences for the family may be left in the online guestbook at www.watsonhunt.com. Watson-Hunt Funeral Home has been entrusted with the arrangements.

The family of Paul Anthony Copeland created this Life Tributes page to make it easy to share your memories.

Send flowers to the Copeland family.