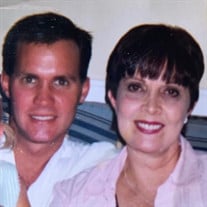 EDGEFIELD, SOUTH CAROLINA – Patsy Allen DeLoach, 74, a native of Vienna, Georgia, passed away peacefully on Wednesday, August 5, 2020, after a brief illness. A Graveside Service for her family and close friends will be held on Sunday, September 6, 2020, in the Cemetery at Lilly First Baptist Church in Lilly, Georgia, where she will be laid to rest beside her son, Hank. The family invites everyone to dress comfortably and wear something pink, Patsy's favorite color. Patsy was the daughter of the late Herbert E. and Mary Brunelle Mitchell Allen. She was a homemaker who worked hard to create a warm and inviting environment in which to raise her children. Patsy was always cheering from the stands at every event in which her children participated. Later in life, she enjoyed spending time with her grandchildren who affectionately referred to her as “LaLa.” It is certain that Patsy was greeted at Heaven’s gates by her Savior, her parents, and her son. Survivors include her daughter and son-in-law, Michelle and David Satcher; a son and daughter-in-law, Anthony M. and Nichole DeLoach; her daughter-in-law, Tommie DeLoach Payne; six grandchildren, Lilly Anne DeLoach, Madeleine DeLoach, Sanford Satcher, John David Satcher, William DeLoach, and Kate DeLoach; her brother, Herbert E. Allen, Jr.; a special friend, Joe Gentzler; and her dog/best friend, Beau. Patsy was preceded in death by her parents, and a son, Henry H. “Hank” DeLoach. Condolences for the family may be left in the online guestbook at www.watsonhunt.com. Watson-Hunt Funeral Home has been entrusted with these arrangements. Edgefield Mercantile Funeral Home assisted the family in South Carolina at the time of Patsy’s passing.

EDGEFIELD, SOUTH CAROLINA &#8211; Patsy Allen DeLoach, 74, a native of Vienna, Georgia, passed away peacefully on Wednesday, August 5, 2020, after a brief illness. A Graveside Service for her family and close friends will be held on Sunday,... View Obituary & Service Information

The family of PATSY ALLEN DeLOACH created this Life Tributes page to make it easy to share your memories.

Send flowers to the DeLOACH family.