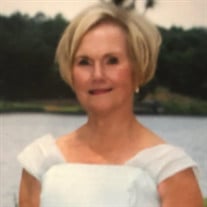 PERRY - Patricia “Pat” Hall Buice Lassiter, 83, passed away peacefully on Friday, July 12, 2019, at Perry Hospital surrounded by her family. Visitation will be held on Monday, July 15, 2019, at 2:00 p.m. and funeral services will begin at 3:00 p.m. in the Sanctuary at Perry United Methodist Church. Interment will be in Evergreen Cemetery immediately following the service. In lieu of flowers, the family respectfully requests memorial contributions to Alzheimer’s Association, 886 Mulberry Street, Macon, GA 31201 or Perry United Methodist Church, 1002 Carroll Street, Perry, GA 31069. Mrs. Pat was born in Omega, Georgia, to the late J.D. and Willene Patrick Hall, grew up in Augusta, and graduated from Richmond Academy. She attended Mercer University where she was a member of Phi Mu Sorority and was a Sigma Nu Fraternity Sweetheart. There, she met Avon Buice and they married in 1955. The couple moved to Perry and he began practicing law at the Nunn & Aultman Law Firm and was later a partner in Nunn, Geiger, Rampey, Buice & Harrintgon. Pat became the homemaker and soon the loving and devoted mother of four. They were members at First Baptist Church of Perry where she was very active in the children’s activities as the “chief cook and bottle washer” for all the church camps and retreats, as well as working weekly for many years on the Charity Committee. Mrs. Pat was loyal to attend her children’s school and sports activities and enjoyed having team gatherings at her home. She was very involved with the Booster Club at Westfield and was a former President. She continued entertaining for her children and their friends until after their graduations from high school. Pat loved entertaining and hosting parties with her friends. She was an active member of the Beltista Club, the Muse Book Club, and several bridge clubs. She began working at Maffett’s Clothing Store in downtown Perry, was soon promoted to Manager, and would bring in customers by wearing outfits from the store around town. As a member of the Perry Chamber of Commerce, Pat was very active in promoting the growth of Downtown Perry. She enjoyed volunteering many hours of her time and was a recipient of the prestigious Seabie Hickson Community Service award given by the Chamber of Commerce each year. Along with her friend and business partner, Billie Sue Thomson, Pat started the company, Bridal Services. They directed weddings, consulted with brides-to-be, and carried a full line of invitations. An extension of the business was the sale of Christmas Cards. She loved people and never met a stranger while calling on customers all over the state of Georgia. Her wonderful and vibrant personality was the driving force for this business. Later in life, Pat rekindled a relationship with former Mercer student and friend, Homer Lassiter. She and Dr. Lassiter married at Houston Lake Country Club in 2008. They were members of Perry United Methodist Church and the IHS Sunday School Class. An only child, Pat was preceded in death by her parents, and her husband, Avon Buice. Left to cherish the memories of Pat are her husband, Dr. Homer Lassiter, and his family; her children, Camille Buice Campanelli (Glen), Kathryn Buice Dieter (Bob), Randall Buice, and Patrick Buice (Angie); her grandchildren, Rob Dieter, Sarah Dieter, Andrew Dieter, Cameron Buice, Ansley Buice, Kendall Buice, and Hall Buice; and several extended family members. Condolences for the family may be left in the online guestbook at www.watsonhunt.com. Watson-Hunt Funeral Home has been entrusted with the arrangements.

The family of Patricia "Pat" Buice Lassiter created this Life Tributes page to make it easy to share your memories.

Send flowers to the Lassiter family.