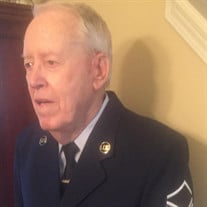 MSgt. Douglas “Doug” Reid Wilson, U.S. Air Force, Ret., formerly of Perry, passed away peacefully on Saturday, January 8, 2022. He was 90 years old. Funeral Services will be held on Wednesday, January 12, 2022. Visitation will be at Watson-Hunt Funeral Home in Perry from 1:00 until 1:45 p.m. followed by a Graveside Service beginning at 2:00 p.m. in Perry Memorial Gardens. In lieu of flowers, the family respectfully requests memorial contributions to the donor’s favorite charity or to the VFW, National Headquarters, 406 W. 34th Street, Kansas City, MO 64111. Doug was born on March 9, 1931, in Anderson, South Carolina, to the late Curry and Mayzelle Powell Wilson. Doug proudly served our country in the U.S. Air Force, joining in 1947 at the age of 16 with his parents’ blessing. Through his military career, he served as a Supply Liaison in Puerto Rico, Trinidad, Thule, Greenland, and the Philippines. Doug retired after 20 years of service and then settled in Atlanta, where he worked for Mingledorff’s as Warehouse Manager for many years. After retiring a second time, he then settled in Perry, Georgia, in 1982. Doug was preceded in death by his wife, Frances Evelyn Donaldson; his daughter, Jeannette Wilson; his brother, Connie Wilson; his sisters, Sybil Wilson Jones and Sara Wilson Osborne; and his wife, Florrie Anne Haygood Wilson. Left to cherish the memories they made with Doug are his daughters, Annette Wilson Brown (Ed) of Auburn, GA, Linda Wilson Helgerson (Rick) of McDonough, and his son, Mike Wilson (Gwen) of Statesboro; five grandchildren; eight great-grandchildren; his brother Gary Wilson (Marie); his sister, Terry Ann Wilson; and several nieces and nephews. Condolences for the family may be left in the online guestbook at www.watsonhunt.com. Watson-Hunt Funeral Home has been entrusted with the arrangements.

The family of MSGT DOUG WILSON, USAF, RET created this Life Tributes page to make it easy to share your memories.