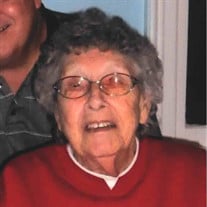 Montine Patterson Brown, 94, passed away peacefully in the early hours of Sunday, June 21, 2020, at Hazel Colson Hospice House after her health began declining just a few months ago. Services will be held on Wednesday, June 24, 2020, with the Visitation beginning at 10:00 a.m. and the Funeral Service beginning at 11:00 a.m. at Memorial Heights Baptist Church. Interment will be in Perry Memorial Gardens where she will be laid to rest beside her beloved husband. In lieu of flowers, the family respectfully requests memorial contributions to ALSAC/St. Jude Children’s Research Hospital, 501 St. Jude Place, Memphis, TN 38105, or Memorial Heights Baptist Church, 521 Courtney Hodges Blvd., Perry, GA 31069. Montine was born in Dooly County to the late Berry and Annie DeLong Patterson. She enjoyed playing basketball in school and was very good. However, at age 15, she secretly went away and married the love of her life, Grady Brown. He worked on the local family farm then enlisted to proudly serve our country in the U.S. Army. After a few moves, including to Michigan and Texas, Grady was tragically wounded during the war. After he spent nearly two years in the hospital, the couple returned to Dooly County and the family farm until they moved to Perry when Grady accepted a position at Robins Air Force Base. Through the years, Montine became a wonderful wife and mother, maintaining and creating an inviting and caring home in which they would raise their three boys, and ensuring that they ate well, cooking daily for her family. She was a Charter Member of Memorial Heights Baptist Church, as was her husband. She was very active in church all of her life teaching Sunday School, GA’s, and Vacation Bible School, attending the Ladies’ Retreat each year at Lake Blackshear, and serving on various committees and volunteering as needed. Once her children were all into school, Montine accepted a job as a waitress with The Coffee Cup in Downtown Perry, where she worked for over fifteen years. A gracious lady with a servant’s heart, she enjoyed seeing all of her friends from church and the community and serving their favorites when they visited the local iconic restaurant. At home, Montine always cooked everything for family holiday gatherings, including her seven-layer chocolate cake, hot macaroni salad, and her famous cornbread dressing. Until shortly after she turned ninety years old, she continued cooking three meals a day, even if it was just for herself and her sons. In her later years, she enjoyed traveling with the Senior Groups from Perry and Centerville visiting various classic locations throughout the Southeast, playing Bingo at the Sr. Center at Rozar Park, and attending the lunch festivities on Fridays at Christ Lutheran Church. Mrs. Montine was an honest, Christian lady who was very candid and would share what she was thinking, whether you wanted to hear it or not. What a blessing she was to so many people in her 94 years on this earth, but what a grand reunion she is celebrating in Heaven with those who passed away before her: her parents, her beloved husband, four brothers, one sister, and a daughter-in-law, Sharon Goolsby Brown. Left to cherish the memories they made with Montine are her loving and devoted sons, Steve Brown, Earl Brown, and John Brown (Debbie), all of Perry; four grandchildren, Shannon Brown, Stephanie Tate, Megan Collins (D.J.), and Lindsey Pleakis (Jason); four great-grandchildren; and several nieces and nephews. Condolences for the family may be left in the online guestbook at www.watsonhunt.com. Watson-Hunt Funeral Home has been entrusted with the arrangements.

Montine Patterson Brown, 94, passed away peacefully in the early hours of Sunday, June 21, 2020, at Hazel Colson Hospice House after her health began declining just a few months ago. Services will be held on Wednesday, June 24, 2020, with the... View Obituary & Service Information

The family of MONTINE PATTERSON BROWN created this Life Tributes page to make it easy to share your memories.

Montine Patterson Brown, 94, passed away peacefully in the early...

Send flowers to the BROWN family.