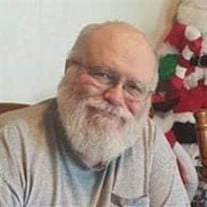 PERRY, GEORGIA - Michael Leslie “Mike” Herman, 73, passed away peacefully on Thursday, October 28, 2021. A graveside service will be held at 2:00 p.m. on Monday, November 1, 2021, at Perry Memorial Gardens. In lieu of flowers, the family respectfully requests memorial contributions to American Heart Association, 5962 Zebulon Road, PMB 359, Macon, GA 31210, or American Diabetes Association, 233 Peachtree Street, Suite 2225, Atlanta, GA 30303. Mike was born in Colorado Springs, Colorado, to the late Leslie Clayton Herman and the late Francis Benita Sarlund Herman. After high school graduation, he met and married the love of his life, Gisela. They had a small farm in Eastern Colorado and enjoyed raising the various farm animals. At a young age, Mike served a goldsmith apprenticeship under his father and after a lifetime of self-employment became a master goldsmith. Upon retirement, he moved to Georgia to be near his grandchildren. A true history buff, he loved history visiting many historical sites, particularly the Civil War sites in Georgia. Mike loved science and astronomy and teaching his children and grandchildren about the constellations. He spent the past ten years of his life in Perry. He was preceded in death by his parents; an infant daughter, Michele Margot Herman; and his faithful and devoted Scottie of over fifteen years, MacGee. Left to cherish the memories they made with Mike are his loving and devoted wife of nearly forty-nine years, Gisela Rothermund Herman of Perry, Georgia; his children, Heather Tidwell (Michael) of Perry, Ken Herman (Shayla) of Karval, CO, and Chris Herman of Perry; thirteen grandchildren; two (almost three) great-grandchildren; and his rescued terrier mix, Emmy. Condolences for the family may be left in the online guestbook at www.watsonhunt.com. Watson-Hunt Funeral has been entrusted with the arrangements.

The family of MIKE HERMAN created this Life Tributes page to make it easy to share your memories.

Send flowers to the HERMAN family.