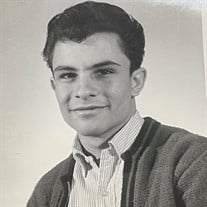 PERRY, GA – Michael D “Mike” Zagami, 75, passed away peacefully on the evening of January 5, 2022, from congestive heart failure. He was surrounded by loved ones. His ashes will be returned to his birth city of Washington, DC, to be placed alongside the remains of his deceased parents. The first child of the late Placidino and Rose Zagami, Mike was born in the Nation’s Capital on April 12, 1947. He grew up and attended school in and around the Washington, DC Metropolitan Area. Upon graduation from High School, he became a journeyman printer, working at the National Security Agency (NSA) and later for the U.S. Senate Service Department from where he retired in the late 1990’s. During and after his printing career, Mike also pursued his artistic talents as a tattoo artist, leaving lasting impressions and art on his community. Mike is survived by his brother, Anthony J. Zagami (Erin) of Washington, DC; his sister, Dena M. Cicoria (Joe) of Lewes, DE; and his children, Lisa M Zagami of Perry, GA, Anna M. Gatz of Woodbridge, VA, Stacy L. Goodman of Dayton, TN, and Louis D. Zagami of Stevensville, MD. He also leaves behind loving grandchildren, great-grandchildren, nieces, nephews, many cousins, and a host of good friends, all of whom will remember him for the kind person he was. Mike touched the lives of everyone he met with his generous soul and positive energy. He will live on through the many stories cherished by family and friends. May he now rest in peace. Condolences for the family may be left in the online guestbook at www.watsonhunt.com. Watson-Hunt Funeral Home in Perry, GA, has been entrusted with the arrangements.

PERRY, GA &#8211; Michael D &#8220;Mike&#8221; Zagami, 75, passed away peacefully on the evening of January 5, 2022, from congestive heart failure. He was surrounded by loved ones. His ashes will be returned to his birth city of Washington,... View Obituary & Service Information

The family of MICHAEL ZAGAMI created this Life Tributes page to make it easy to share your memories.

Send flowers to the ZAGAMI family.