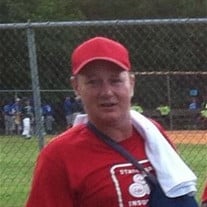 BYRON – Scott Cotton, 51, passed away on June 26, 2019, after a brave battle with cancer. Service arrangements are pending at this time. As soon as any information is available, it will be promptly shared here. Scott was born in Ft. Valley and grew up in Perry. A 1986 graduate of Perry High School, he graduated from South Georgia Technical School. After an unfortunate motorcycle accident left him somewhat physically restricted, Scott learned to enjoy the peacefulness of sitting beside the river watching the water flow. He spent many hours with his treasured friends sitting around a pit, or even just a pile of wood, watching the flicker of a crackling fire. A NASCAR fan, he savored the trips to Talladega, Alabama, twice a year for the races. Scott worked as a supervisor at Goodwill Industries until his health prohibited. His beloved family and especially his devoted mother cared for him closely, particularly the last year of his life. Family time was very important to Scott, and he was quite enchanted by his precious nieces with whom he greatly valued the time spent through their short lives. His precious dog, Lucky, a black lab who pranced into his life when she “just showed up” at his house at the young age of three months, was Scott’s pride and joy. He was loved by so many, and will be dearly missed by all those who knew him. Left to cherish the memories they made with Scott are his mother and step-father, Elizabeth “Betty” Kelly and Allen Hargrove of Byron; his father and step-mother, Richard and Penny Cotton of Brunswick, his sister, Rebecca “Becky” Cotton Medlin (Eddie) of Chattanooga, TN; his nieces, Lillie Elizabeth Medlin and Anna Rebecca Medlin; and his beloved four-legged, loyal companion, Lucky. Many cousins, aunts, uncles, and dear friends also survive. The family is thankful for the hundreds of messages they have received and the many prayers from lots of wonderful people who loved Scott and also love them. Condolences may be left in the online guestbook at www.watsonhunt.com. Watson-Hunt Funeral Home has been entrusted with the arrangements.

BYRON &#8211; Scott Cotton, 51, passed away on June 26, 2019, after a brave battle with cancer. Service arrangements are pending at this time. As soon as any information is available, it will be promptly shared here. Scott was born in Ft. Valley... View Obituary & Service Information

The family of Michael Scott Cotton created this Life Tributes page to make it easy to share your memories.

Send flowers to the Cotton family.