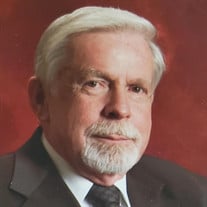 BYRON, GA – William Maynard Watson, 82, of Smithfield Kentucky, passed away peacefully on March 5, 2022. Memorial Services will be held at Byron Baptist Church in Byron, Georgia, on April 14, 2022, with the Visitation beginning at 4:30 p.m. and the Celebration of Life Service beginning at 5:00 p.m. Maynard Watson will be laid to rest alongside family members at Parkway Memorial Gardens, 720 Carl Vinson Parkway, Warner Robins, Georgia. Maynard was former Police Chief for the City of Byron, Georgia, and City Marshall of Byron, Georgia. He proudly served our country for 11 years in the U.S. Army National Guard, Company B, 161st Tank Bn. He was a member of Lions Club International, Rotary Club, Blue Knights of Georgia-Chapter XII, The National Exchange Club, and Kiwanis Club, actively involved in each when he lived in Middle Georgia. He also enjoyed riding his motorcycle with the Gold Wing Road Riders Association (Georgia and Kentucky), Southern Cruisers Riding Club, Rolling Thunder Inc. of Georgia, and The Patriot Guard, all with whom he was a member. Maynard learned a great deal during his memberships with the Georgia Association of Chiefs of Police and The Peace Officers’ Association of Georgia. Mid Georgia Gem and Mineral Society welcomed Maynard as a member, as well, and he delighted in learning about and searching for rocks, minerals, and fossils in the Middle Georgia area, and sharing his own personal treasures with other members. Preceding him in death were his parents, Renfroe Edward Watson Sr. and Elizabeth Zellner Watson, of Forsyth Georgia. Left to cherish the memories they made with Maynard are his wife of 58 years, Crystal "Chrys" Watson; his daughter, Dixie Wells (Keith); his grandchildren, Jordan Wells and Sydney Wells; his siblings, Blanche Chapman (Ray), Betty Pierson, Renfroe Watson, Jr. (Phyllis), Sam Watson (Nancy), Janette Gray, and Wanda Fordham; and many nieces and nephews. Condolences for the family may be left in the online guestbook at www.watsohunt.com.

BYRON, GA &#8211; William Maynard Watson, 82, of Smithfield Kentucky, passed away peacefully on March 5, 2022. Memorial Services will be held at Byron Baptist Church in Byron, Georgia, on April 14, 2022, with the Visitation beginning at 4:30... View Obituary & Service Information

The family of MAYNARD WATSON created this Life Tributes page to make it easy to share your memories.

Send flowers to the WATSON family.