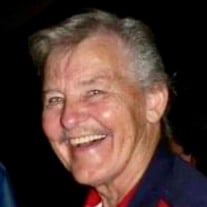 PERRY, GA – Marvin Augustus Davis, 86, passed away peacefully and was welcomed into the arms of Jesus on Monday, July 19, 2021. Services will be held on Friday, July 23, 2021, at Christ’s Sanctified Holy Church. The Visitation will begin at 12 Noon, and the funeral will start at 1:00 p.m. with Rev. Gary Collier officiating. Interment will be in The Cemetery at Christ’s Sanctified Holy Church Campground. Marvin was born in Birmingham, Alabama, to the late Pete and Lera Jernigan Davis. He was a member of Christ’s Sanctified Holy Church. He loved his church and directed the choir in Atlanta for many years. He loved Gospel music. As a young man, Marvin attended Stamps-Baxter School of Music in Dallas, Texas. He later toured North America with The Songsmen Quartet. He wound up his singing career with The Sunshine Boys. In 2010, Marvin was inducted in to the Atlanta Country Music Hall of Fame alongside earlier inductees such as Hovie Lister, Eva Mae LeFevre, and Dottie Rambo. Today, all of that pales in comparison as he, along with a multitude of heavenly hosts, is singing a new song before The Throne. Left to cherish the memories they made with Marvin are his children, Wayne Davis (Donna) of Columbia, SC, Denver Davis (Anita) of McDonough, GA, and LeReita Davis of Perry; nine grandchildren; twenty great-grandchildren; four great-great-grandchildren; and several nieces and nephews. Marvin was preceded in death by his parents; his brother, Charles Truman Davis; his sister, Dorothy Davis Johnson; and his beloved wife of sixty years, Mary Chandler Davis. Condolences for the family may be left in the online guestbook at www.watsonhunt.com. Watson-Hunt Funeral Home has been entrusted with the arrangements.

The family of MARVIN AUGUSTUS DAVIS created this Life Tributes page to make it easy to share your memories.

Send flowers to the DAVIS family.