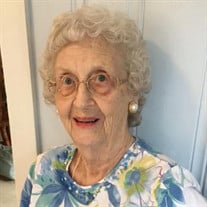 PERRY – Mamie “Penny” Harshbarger Ingram passed away peacefully on Monday, January 3, 2022, at the LifeSpring Church Home where she had been lovingly cared for during the past three years. She was one hundred years old. Services will be on Friday, January 7, Visitation will be at 1:00 p.m. in the Chapel at Watson-Hunt Funeral Home in Perry. The family will leave the funeral home at 1:45 p.m. in a procession to the Graveside Service at 2:00 p.m. in Perry Memorial Gardens. Penny was born in Salem, Virginia, to the late George and Mary Rucker Harshbarger. A natural athlete, she played basketball in high school and was quite proud that she was the Center, leading the team to many victories on offense and defense. Penny graduated from High School in the Class of 1939 and immediately took a full-time position at a local hosiery mill. After a short time, she met the love of her life, James B. Comer. He joined the Army Air Corps and was sent away during World War II, along with many other men in Virginia, while Penny continued working at the hosiery mill. During that time, a women’s baseball league was formed, and she developed a love for baseball – playing and watching. Upon Jim’s return from war, the couple married in 1945, and soon Jim returned to life as a civilian. He accepted a position with Civil Service at Robins Air Force Base, and they moved to Georgia with their two children. Penny was a wonderful mother, always working to create a loving and welcoming environment while continuously enforcing good manners. Penny became active in Bonaire Baptist Church where she volunteered often and taught primary students at Sunday School for a number of years. In 1968, Penny and her family were devastated by the sudden loss of her husband, Jim. She soon returned to school as a nursing student and earned an Associate’s Degree in Nursing. Several years later, Penny was fortunate enough to find love again, married Jerry Ingram in 1972, and moved to Perry. She joined First Baptist Church of Perry where she was also a member of the Dorcas Sunday School Class, usually serving as an officer each year, and was a member of the Women’s Missionary Union. With both of her husbands being veterans of World War II, Penny was a member of the American Legion Auxiliary and was honored to have been a Former President of the organization. Penny worked in the office for Dr. M. V. Anders for fifteen years as his nurse, then was offered an opportunity to work at College Street Hospital in Macon, which she accepted. After ten years, Penny retired from nursing at age sixty-two. She enjoyed spending time with her family, and was grateful that Jerry loved her children and grandchildren as if they were his own. Penny was preceded in death by her husband of twenty-three years, Jim Comer; her brothers, Jacob Harshbarger and Woody Harshbarger; her son, Mark Comer; and her husband of thirty-seven years, Jerry Ingram. Left to cherish the memories of Penny are her loving and devoted daughter, Marlene Comer Wilson Allen of Bonaire; her grandchildren, Wendy Shaw (William) of Centerville, Jim Wilson (Amy) of White, GA, Donna Jespersen of Bonaire; her bonus granddaughter, Lynn Elkins (Ken) of Clemmons, NC; her great-grandchildren, Hannah Shaw, Ethan Wilson, Noah Wilson, Autumn Wilson, Jessica Jespersen, Quinn Elkins (Emily), and Carly Elkins; and several nieces and nephews. Condolences for the family may be left in the online guestbook at www.watsonhunt.com. Watson-Hunt Funeral Home has been entrusted with the arrangements.

PERRY &#8211; Mamie &#8220;Penny&#8221; Harshbarger Ingram passed away peacefully on Monday, January 3, 2022, at the LifeSpring Church Home where she had been lovingly cared for during the past three years. She was one hundred years old. Services... View Obituary & Service Information

The family of MAMIE "PENNY" INGRAM created this Life Tributes page to make it easy to share your memories.

Send flowers to the INGRAM family.