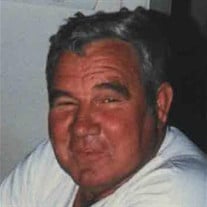 PERRY – Malcolm Paul Dean, Sr., 73, passed away peacefully on Good Friday, April 19, 2019, after an extended illness. A Graveside Service will be held on Tuesday, April 23, 2019, at 3:00 p.m. at Perry Memorial Gardens. The family will visit with friends at the home of Mr. Dean after the service. In lieu of flowers, the family respectfully requests memorial contributions to Chords of Kindness (the named fund in memory of Kody Lucas), c/o Jay’s HOPE, 1157 Forsyth Street, Macon, GA 31201 or to the charity of the donor’s choice. Malcolm was born in Leslie, Georgia, to the late John Paul and Kathleen Jones Dean. His family moved to Perry when he was a young child and he had lived there the rest of his life. His father was a brick mason, which was a family trade. Malcolm worked with his father and brothers until he started his own business. He was a brick mason for over 40 years. Malcolm enjoyed hunting and following NASCAR, but he especially loved fishing. He took his family camping through the years when his children were growing up. He treasured the time spent with his family, particularly his grandchildren. He was preceded in death by a grandson, Kody Lucas; his loving and devoted wife, Carolyn Dean; and three brothers, Roland Dean, Steve Dean, and Wallace Dean. Left to cherish the memories they made with Mr. Dean are his children, Donna Moss (Michael) and Malcolm Dean, Jr., both of Perry; his grandchildren, Gracie Dean, John Paul Dean, Dylan Sapp, and Ryan Moss; his siblings, Gloria Hughes, Earnestine Hurley (Chuck), Charlie Dean, William Dean (Betty Anne), Earl Dean (Pam), and Earlene Thornton; his sister-in-law, Bobbie Dean; and many nieces and nephews. Condolences for the family may be left in the online guestbook at www.watsonhunt.com. Watson-Hunt Funeral Home has been entrusted with the arrangements.

The family of Malcolm Paul Dean Sr. created this Life Tributes page to make it easy to share your memories.

Send flowers to the Dean family.