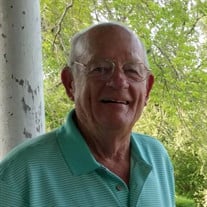 PERRY – Major Larry Roger Fales, U.S. Army RET, 77, passed away peacefully on Wednesday, October 20, 2021. A Memorial Service will be held on Saturday, October 23, 2021, at 1:00 p.m. in the Fairway Ridge Clubhouse in Houston Springs with Pastor Jim Hamlin officiating. After the service, the family will visit with friends and enjoy a reception in memory of Larry. In lieu of flowers, the family respectfully requests memorial contributions to Heartland Hospice, 200 Northside Crossing, Macon, GA 31210, or St. Jude Children’s Research Hospital, 501 St. Jude Place, Memphis, TN 38105. Larry was born in Wurtland, Kentucky, on August 6, 1944. After high school graduation, he proudly served his country in the U.S. Army. He was a humble man and a true patriot, never wanting recognition for his duties as a helicopter pilot. The Army presented Larry with many opportunities which included receiving a Bachelor of Science Degree to advance his education, traveling the world, and experiencing first-hand the hard work that service men endure daily. A veteran of Vietnam, he retired having received the rank of Major after twenty years of service. Larry married the love of his life, Pat, lived in Jones County, Georgia, and was a member of Rogers Methodist Church in Monroe County, Georgia. They blended their families and instantly were given grown children who became their own. In 2004, Larry and Pat moved to Perry, Georgia, to help establish a new community for mature adults. Having the fourth residence built in the development allowed Larry to grow to love Houston Springs “from the ground up,” and he did just that. He accepted a position with Woodland Properties and handled many duties through the years with his favorite work location being the Houston Springs Pro Shop. An avid golfer all of his life, Larry enjoyed playing every chance he got, sometimes daily. He was a family man and treasured time spent with his beloved wife, children, grandchildren, great-grandchildren, and his precious fur baby, Grace Ann. Larry was preceded in death by his parents, Harold Vinson Eskew, Sr., and Lavonia Vera Mae Jacobs Eskew. Left to cherish the memories they made with Larry are his loving and devoted wife of twenty-seven years, Pat Fales of Perry; his children, David Fales (Keita) of Jackson, TN, Bonita Fales, Vivian Lavone Richards, and Veronica Basye (Kiska), all of Melbourne, FL, Sharon Durden McBride (Tommy) of Hawkinsville, Charlene Abbott (Rob) of Dublin, and Charlie “Bubba” Durden, Jr., of Savannah; fourteen grandchildren and nine great-grandchildren who lovingly referred to him as “Grandpa,” his sister, Brenda McQuiston (Dean) of Mico, FL; his brother, Harold “Junior” Eskew, Jr.; several nieces and nephews; and his Yorkie, Grace Ann Fales. Condolences for the family, special memories, and funny stories about experiences with Larry may be left in the online guestbook at www.watsonhunt.com. Watson-Hunt Funeral Home has been entrusted with the arrangements.

The family of MAJOR LARRY R. FALES, U.S. Army RET created this Life Tributes page to make it easy to share your memories.

Send flowers to the FALES, US Army RET family.