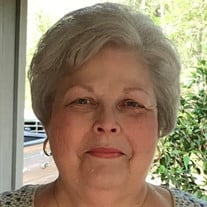 PERRY- Louise Watson McHargue passed into the gentle arms of Jesus on Wednesday, December 11, 2019, at her home surrounded by her loving family after waging a courageous battle with cancer for over 6 years. The family will visit with friends on Sunday, December 15, 2019, from 4:00 to 6:00 p.m. at Watson-Hunt Funeral Home. Funeral Services will be held on Monday, December 16, 2019, at 11:00 a.m. in the Chapel at Watson-Hunt Funeral Home. Interment will also be on Monday, December 16, 2019, at 3:00 p.m. in Bloodworth Cemetery in Taylor County within the Charing Community. Louise was born in Columbus on February 3, 1950, to the late James Addis Watson and the late Emma George Bullard Watson. She retired from Civil Service at Robins Air Force Base as a Human Resources Assistant in 2007 with 23 years of service. Louise was blessed with many gifts including her amazing sense of humor, her gift of gab, and her ability to tell a story in a way that only she could. She was a member of Rose Hill Baptist Church in Columbus, Georgia. Later in life, she was reborn and joined the fellowship at Oakland Baptist Church in Warner Robins. She was predeceased by her father, Addis Watson; her mother, Emma George Watson; her step-father, Morris Bronwood Watson, who was the only “Grandpa” that her children ever knew; and her two brothers-in-law, Stephen O. Daffron and Calvin Eugene "Big Gene" Brown. Louise is survived by her two daughters, Dawn M. Maddox (Dan) and Wendy M. Toliver (Byron Harris), both of Perry. Dawn’s two children, Tucker A. Maddox and Georgia M. Maddox have enjoyed Louise daily throughout their lives. The proudest “Meme” ever, she adored her grandchildren, and spoiled them rotten. Also surviving are her two sisters, Joyce W. Brown of Mauk, and Dorothy W. Daffron of Allen, Texas; a niece, Tiffany Daffron; a nephew, Cammeron Daffron; and many cousins, nieces, nephews, extended family members, and friends she considered family, too. Condolences for the family may be left in the online guestbook at www.watsonhunt.com. Watson-Hunt Funeral Home has been entrusted with the arrangements.

PERRY- Louise Watson McHargue passed into the gentle arms of Jesus on Wednesday, December 11, 2019, at her home surrounded by her loving family after waging a courageous battle with cancer for over 6 years. The family will visit with friends... View Obituary & Service Information

The family of Louise Watson McHargue created this Life Tributes page to make it easy to share your memories.

PERRY-
Louise Watson McHargue passed into the gentle arms of...