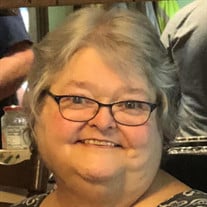 PERRY – Louise ”Lou” Fay Grisenthwaite, 69, passed away on Tuesday, February 23, 2021, after an extended illness. Graveside Services will be held at a later time and will be announced by her family. Lou was born in Terre Haute, Indiana, to the late Maxine Bohannon Fay and the late Howard Edwards Fay, but was loved and raised by Richard L. Cochran. She grew up in Cory and Bowling Green, Indiana, and graduated from Clay City High School. After high school, Louise earned a Bachelors’ Degree in Speech Pathology from Indiana State University in 1974. Lou was employed by the Houston County School System as a Speech Pathologist from 1974 to 1983. She then expanded her education by obtaining a Master’s Degree in Early Childhood Education from Mercer University in 1985. She taught 4th grade at Tucker Elementary from 1983 to 2001. Lou helped create Perry Players and organize the Drama Club at Tucker Elementary School. She volunteered through the years with Habitat for Humanity, The American Red Cross, Perry Players, Loaves and Fishes, PAL, and the Adult Literacy Program. During retirement, she served as a volunteer secretary at Andrew United Methodist Church and worked closely with the youth program at AUMC. Lou enjoyed reading, playing Bridge, writing Christian songs, singing, and participating in theater. She was married to and loved by Gary Richard “Rick” Grisenthwaite for forty-three years. Rick and Lou raised their daughter, Kelly Marie, and now she and her husband, Billy Bramblett, live on the Grisenthwaite family farm with their three children, Reilly, Gwendolyn, and Damien. Left to cherish the memories they made with Lou are, her husband, Gary Richard “Rick” Grisenthwaite; her daughter and son-in-law, Kelly and Billy Bramblett; her grandchildren, Reilly Bramblett, Gwendolyn Bramblett, and Damien Bramblett; her sister-in-law, Beverly Fay of Brownsburg, IN; her nieces, Tina Teskey (Merle) of Brownsburg, IN, and Robin Dragon (Dan) of Cookeville, TN; and her great-nieces and great-nephew, Mallory Fay, Shelby Christian (Joey), Quentin Dragon, Nadia Dragon, and Sylvia Dragon. She was preceded in death by her parents and her brother, Phil Fay. Please sign the online guestbook at www.watsonhunt.com. Watson-Hunt Funeral Home has been entrusted with the arrangements.

PERRY &#8211; Louise &#8221;Lou&#8221; Fay Grisenthwaite, 69, passed away on Tuesday, February 23, 2021, after an extended illness. Graveside Services will be held at a later time and will be announced by her family. Lou was born in Terre... View Obituary & Service Information

The family of LOUISE "LOU" FAY GRISENTHWAITE created this Life Tributes page to make it easy to share your memories.

Send flowers to the GRISENTHWAITE family.