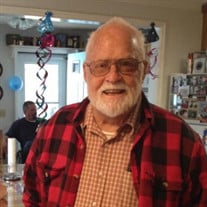 Leroy Bennett, 89, went home to be with the Lord on Friday, January 15, 2021, with his loving family by his side. Everyone is invited to participate in a safe-distance visitation by remaining in the comfort of your vehicle as you drive through the circle driveway at Watson-Hunt Funeral Home to express love and support for his family on Sunday, January 17, 2021, from 3:00 p.m. until 4:30 p.m. Considering the current Covid pandemic, a service to Celebrate the Life of Leroy will be held on Monday, January 18, 2021, at 11:00 a.m. outside at Free Point Church. Please wear a mask for the protection of everyone there. Leroy was born in Homerville to the late Henry and Mabel Smith Bennett. He met the love of his life, Retha Herrin, and the couple married on November 6, 1952. Just eleven short days after they said their vows, Leroy was drafted into U.S. Army and proudly served our country during the Korean War. After his years of service in the military, they moved to Perry in 1963. Leroy was a charter member of Perry Church of God, now Free Point Church, and continued to be a faithful and active member. He started Bennett’s Pest Control in 1985, and it became a family business with his son and other family members working with him. Leroy worked tirelessly to provide for his family every day and became a household name with many home owners in and around Perry. After he retired from pest control, he became known as the “Mater Man” selling fresh garden vegetables at the local farmer’s market on Saturdays and at “the station” downtown during the week. Many people knew him as “Pop” or “Papa Smurf” and made a point to speak to him when they saw him, even if they didn’t know his real name. Through the years, when Leroy was seen around town, he was always wearing his Korean War Vet hat as a reminder of his strength and endurance that it always took to get through his military days, and life. His faith in God never failed, and he wanted all of his loved ones in church with him. Leroy was a kind man who loved his family most of all and will be dearly missed by those who knew a loved him. Left to cherish the memories they made with “Pop” are his loving and devoted wife of sixty-eight years, Retha Herrin Bennett of Perry; his son and daughter-in-law, Larry and Belinda Bennett; his daughter and son-in-law, Robin and Chris Joyner; his grandchildren, Travis Bennett, Kevin Bennett, Brooke Arrington (Robert), Janna Bennett, Kameron Woodall (Hunter), and Bobby Baker (Leah); his great-grandchildren, Tayler, Drake, Liam, Clayton, Lilli, and Sunni; many nieces and nephews, great-nieces and great-nephews; and Carolyn Lamb, lifetime friend. He was preceded in death by his parents; four brothers; four sisters; a daughter, Libby Bennett; and his former pastor, Charles Lamb. Condolences for the family may be left in the online guestbook at www.watsonhunt.com. Watson-Hunt Funeral Home has been entrusted with the arrangements.

Leroy Bennett, 89, went home to be with the Lord on Friday, January 15, 2021, with his loving family by his side. Everyone is invited to participate in a safe-distance visitation by remaining in the comfort of your vehicle as you drive through... View Obituary & Service Information

The family of LEROY BENNETT created this Life Tributes page to make it easy to share your memories.

Leroy Bennett, 89, went home to be with the Lord on Friday, January...

Send flowers to the BENNETT family.